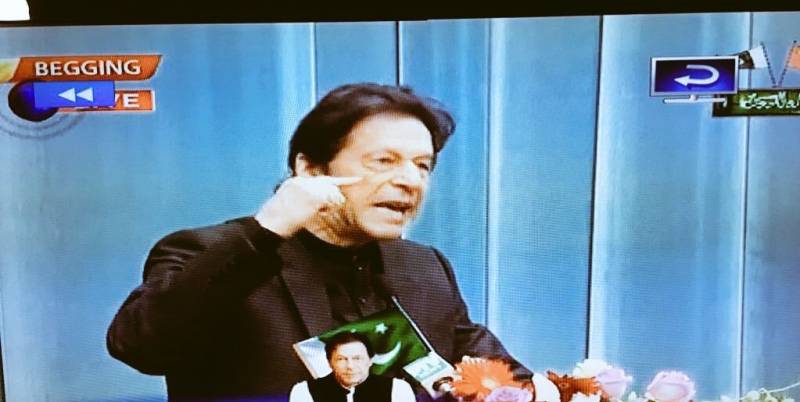 ISLAMABAD - The state broadcaster has issued a formal apology for giving a hilarious caption to Prime Minister Imran Khan's location "by mistake".

The administration of Pakistan Television (PTV) says someone from the news team accidentally mistyped PM Khan's location as 'Begging' instead of Beijing - bringing a storm to the social media.

Watch the caption at top left..

The state-run channel also issued an apology on Twitter, saying the incident is regrettable and a strict action has been initiated under rules against concerned officials

Today, during a live address of the Prime Minister during his ongoing visit to China, a typographical error took place, which remained on screen for 20 seconds & later removed. This incident is regrettable. Strict action has been initiated under rules against concerned officials pic.twitter.com/qphQF1GSu1

The premier is currently visiting China to seek Chinese assistance in boosting the country's economy.

During Khan’s visit to China, both the sides have signed 15 agreements and memorandums of understanding (MOUs) for cooperation in diverse fields were signed between the two countries.

BEIJING - Pakistan and China released a joint statement on Sunday agreeing to further strengthen relations between the ...

Earlier, PM Khan successfully got a bailout package of $6 billion from the friendly kingdom of Saudi Arabia.