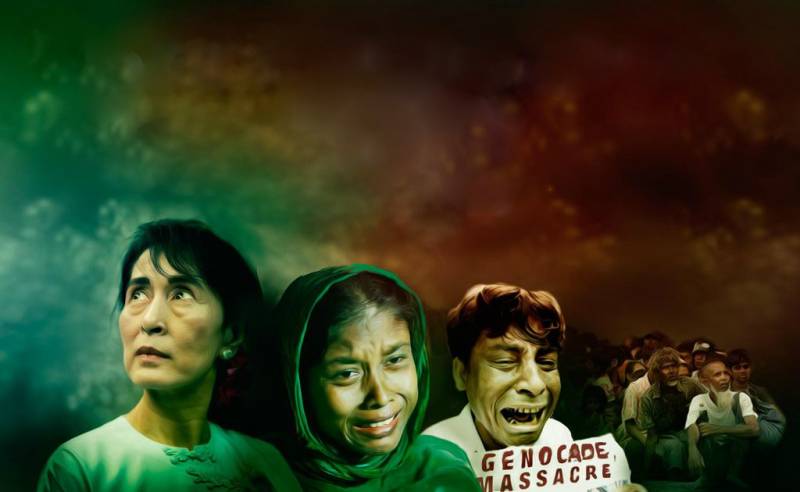 Myanmar is a stark lesson in contradictions. Despite its leaps in progress and transition to a democracy from five-decade old military dictatorship, the country is ranked amongst the most hostile towards minorities, especially its over 1.1 million Rohingya population. With much global fanfare, the elected government took over the country in March 2016. The country’s ethno-religious integration has been a challenge National League for Democracy (NLD) party of Aung San Suu Kyi has shied away from addressing. Mostly concentrated in Rakhine region in the northwest of the country, the persecution of the Rohingya continues unabated, often puttin the atrocities committed by the ISIS to shame.

In recent months, the government and military have tried to raise the alarm for an armed Muslim insurgency. On August 25, a small group of militants – Arakan Rohingya Salvation Army, or ARSA ­– allegedly attacked a government office in the province. The military responded to the disruption in Chut Pyin village but with excessive and indiscriminate use of force, killing hundreds of unarmed people, including women and children. Simultaneously, Buddhist militiamen armed with knives and machetes beheaded many villagers while herding others beneath bamboo sheds before torching them to death. As a steady outflow of Rohingya people into Bangladesh and Thailand continues, the military put the death toll at 400 while eyewitness accounts, photographs and satellite imagery paint a more harrowing picture.

In 2016, Yangon mobilized military to track down militants of previously unknown Al-Yakin Mujahidin group in the Maungdaw area. The reactionary Islamist group had posted videos and messages on social media of conducting coordinated attacks on several border guard posts. Myanmar’s civilian government claimed that the group comprised of 400 fighters.

The ensuing insurgency is a new phenomenon apparently resulting from the apathy of the NLD government towards Rohingya persecution, who are an ethnic minority in the predominantly Buddhist populace. Since the bloody attacks of Buddhists militias starting as back as 2012, the Rohingya have been desperately attempting to take refuge in Bangladesh and Thailand. While Hasina Wajid, prime minister of Bangladesh, sternly refused to allow them in, the journey of Myanmar’s outcast to Thailand has been a bloody one.

Recently, admission of genocidal actions came from Army commander General Min Aung Hlaing who bluntly stated that the military’s campaign is carrying out “unfinished business” which began in World War II. Min Aung Hlaing was referring to in 1942 riots when Rohingya sided with British forces against Buddhist ally Japan.

Since the outbreak of violence, more than 100,000 Rohingya were forced from their homes into camps. While there have been no serious efforts for their return, attacks against them continued amid little or minuscule media coverage of the atrocities.

The UN characterizes the Rohingya Muslims, a religious and ethnic minority community, as one of the world’s most persecuted minorities. Since 1962, the military has been ruling the country with an iron fist. Besides curbing political dissent, the armed forces always saw the Rohingya Muslims as an anomaly. They were attacked, raped, tortured and killed, often triggering mass exodus to neighbouring Bangladesh. Their nationality was denied and had to virtually live as ‘stateless’ people in contravention of the Universal Declaration of Human Rights. The UN guarantees the right to a nationality, prohibiting its arbitrary deprivation. However, the Burmese Citizenship Act of 1982 codified the legal exclusion of the Rohingya denying them equal citizenship rights.

Though Myanmar recognizes 135 ethnic groups within its borders, it refuses the existence of the Rohingyas. Shockingly, Daw Aung San Suu Kyi had no qualms accepting and advocating the view when she forbade the US ambassador, her key supporter, against using the term ‘Rohingya’. The minority community is referred to as Bengalis by ethnoreligious Buddhists groups.

The country’s Muslim community is deprived of access to identity documents, education and employment. They have no access to the legal system consequently. The military and police force detain them arbitrarily, use them as forced labour and impose taxes as desired. The Rohingya people can neither own property nor officially marry or travel inland due to the apartheid nature of the state.

The hostility towards international institutions, UN and foreign humanitarian agencies has been unprecedented. The UN assessment cited a “pattern of gross human rights violations” against the Rohingya, and feared the phenomenon escalating to the level of “crimes against humanity.”

Since the Rohingya Muslims are not part of the voting process, Aung San Suu Kyi has been watchful of her own vote bank. She has been particularly careful about annoying the Buddhist population, which has been increasingly intolerant of other ethnic communities. Moreover, she has been moving slowly to keep her relations with the powerful military far from being confrontational. Along the way, the persecution has continued while the additional complication of a small militant group emerging within the Muslims to take revenge from the Myanmar’s military, police and other Buddhist militias. Though she has been awarded Nobel Peace Prize, the NLD leader has not kept her bias against Muslims of her country a secret. Like the Buddhist majority, she is not ready to accept the Muslims as sons of the soil but as Bengalis.

Under tremendous foreign pressure, she appointed former UN secretary general Kofi Annan to head the Advisory Commission on Rakhine State formed in August to study conditions in Rakhine. There has been little progress since. With tensions soaring on the ground, it is extremely less likely that the former UN Secretary General will be able to visit the region and conduct independent access inside Myanmar.

Meanwhile, the government’s June bid for citizenship has been hit with colossal suspicion within the Rohingya people, the majority of whom refused to participate over suspicions further erosion of their rights.

“Things take time,” Kyi said. “The situation in the Rakhine is a legacy of many, many decades of problems. It is not something that happened overnight. We’re not going to be able to resolve it overnight. It goes back even to the last century.”

The ethnoreligious violence that previously erupted in June 2012, October 2012, March 2013, and April 2013 has been spreading further to other regions of the smaller Muslim population. This is happening because the perpetrators of violence have never been taken to task. The immunity has flared the arsonists’ confidence. The situation is ironically similar to the one in disputed Kashmir’s Indian part where lack of human rights and holding of plebiscite resulted in the armed insurgency, which India has been branding as terrorism.  In the vacuum of state authority, Rohingya youth may increasingly take the matters into its own hands and initiate a deadly insurgency.

A recent research by Georgetown University concluded that state restrictions on religious freedom might contribute to violent extremism. Myanmar is seemingly taking that route fast as conditions are ripe for the radicalization of alienated religious communities. Neighboring Bangladesh is already a fertile ground for Daesh recruitment, partly thanks to anti-Islamist policies of Hasina Wajid government in Dhaka. The persecuted stateless Rohingya Muslim may take the same course in a bid for revenge and media attention alike.

Washington designates Myanmar as a Country of Particular Concern (CPC) under the International Religious Freedom Act yet it has withdrawn sanctions against the country following the elections. Putting on Washington’s watch list won’t impact the on the ground situation. During the Obama administration, the White House impact globally has steeply nose-dived. Given the Chinese influence over the Myanmar military, America’s leverage remains limited, not to mention its own weaker commitment to human rights. Given its discomfort with Beijing, Washington can’t afford to annoy Kyi’s government, even though Myanmar vividly resembles apartheid South Africa and Israel.

Dividends of political transition have proven to be clearly constrained as Suu Kyi's party government is not yet strong enough to take bold decisions. The government’s key aim for has been ensuring smooth political transition while leaving law and order issues for the military to deal with. The access of media and its freedom to leave much to be desired. Kyi’s party clearly has little difference of views with its military on the issue of Rohingya Muslims. The Nobel Laureate spoke in favour of disenfranchisement while condoning violence in the crudest of manners.

Turkey has played a leading role in reaching out to the Rohingya population with its then premier Ahmet Davotuglu visiting the camps in 2012 and 2013 besides bringing shipments of humanitarian aid. Giving up on the Burmese government, now Turkish President Recep Tayyip Erdogan has called upon Bangladesh to host the refugees while offering to bear the expenses. Prime Minister Hasina Wajid won’t oblige Ankara but may keep the border open.

What started with the rise of ARSA and al-Yakin Mujahideen can snowball into something more dreadful and frenzied. Not only Myanmar can become a base for Muslim radicalism but also for Buddhist militancy, both of which can inflame Southeast Asia with hate and damp the prosperous region in bloodshed. Extremists subscribing to Al-Qaeda or ISIS can exploit the quandary of Myanmar Muslims as much in Bangladesh as in the Philippines restive region of Mindanao. Buddhist intolerance for other religions may also proliferate from Sri Lanka to Thailand and elsewhere in southeastern Asia.

The only ray of hope for the short run is to engage in hectic diplomacy with the NLD government in Myanmar and ensure supply of humanitarian services for the displaced and besieged people. So far, the OIC role has been limited to the persuasion of Myanmar government and solidarity with the stateless Rohingya people. After August massacres, the organization has come under tremendous pressure to act on humanitarian basis while China, being a close ally of various Muslim countries, has also been urged to exercise its clout in impressing upon the Myanmar military. Washington and its allies won’t officially annoy Yangon owing to geopolitical goals. The Arab states as well as the European countries reminding Myanmar of its duty towards the people and human rights. Geopolitics and geoeconomics must not hold the comity of the nation from imposing sanctions if Yangon does not mend its behaviour.

For the Muslim minority community, food and security continue to remain equally vital necessities. Kofi Annan must lead the campaign for an end to persecution of the Rohingya while drumming up the case for global humanitarian assistance.Above the advisory commission, he leads must come up with a viable recommendation for normalizing life in Rakhine State by building the trust of the persecuted populace.