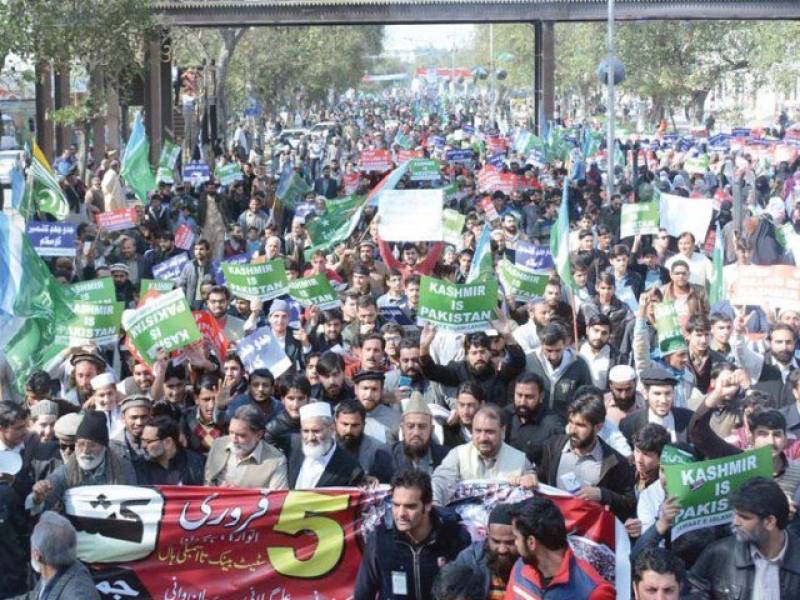 LAHORE - Kashmir Solidarity Day is being observed today to reiterate whole-hearted support of the Pakistani nation to just struggle of Kashmiri people for their inalienable right to self-determination under UN resolutions.

On the occasion, President Arif Alvi will address a session of the AJK Legislative Assembly in Muzaffarabad. He will also address a function in the federal capital in the evening, Radio Pakistan reported.

In the federal capital Islamabad, people belonging to different strata of society will form a human chain at D-Chowk to express solidarity with their oppressed Kashmiri brethren. One minute silence will be observed at 10.00 am to pay homage to the martyrs of the liberation struggle of occupied Kashmir.

Rallies, public meetings, and seminars will be held across the country, including Azad Kashmir to draw the attention of the world community towards grave human rights violations and brutalities against innocent Kashmiris by the Indian security forces.

This time around, events have also been organized in London to effectively project humanitarian aspects of the lingering Kashmir dispute at the world level.

In connection with the day, News and Current Affairs Channel of Radio Pakistan will broadcast special marathon transmission. Different aspects of Kashmir dispute will be discussed while Kashmiri songs, promos, live reports and interviews of prominent personalities will also be broadcast during the special transmission.

In his message on Kashmir Solidarity Day, Pakistan’s Foreign Minister Shah Mehmood Qureshi lauded Kashmiri youth’s struggle for freedom in Kashmir. He reiterated that Pakistan will continue its support for the Kashmiris. He believed that it is our firm belief that the Kashmiris will succeed in their struggle.

In Azad Jammu and Kashmir, people will observe Kashmir Solidarity Day with a renewed pledge to seek a solution to the longstanding dispute in accordance with the UN resolutions and aspirations of the Kashmiri people. The day will dawn with special prayers for the martyrs and success of the freedom movement. Human Chains will be formed at Kohala, BararKot and other points linking Pakistan and Azad Kashmir.

In Muzaffarabad, the main event of the day will be the special session of Azad Jammu and Kashmir Legislative Assembly which will be addressed by President of Pakistan Dr Arif Alvi. Food would be distributed among the Kashmiri refugees in their camps at Muzaffarabad, Bagh, Kotli and Mirpur.

In Khyber Pakhtunkhwa (KP), the main function in connection with the Kashmir solidarity day will be held in Peshawar.

The speakers will pinpoint the atrocities being perpetrated by Indian troops on the innocent Kashmiris in occupied territory. Meanwhile, rallies will be taken out from Hashtnagri, Gulbahar and Chamkani to mark the day.

Similarly, a photographic exhibition has also been arranged to highlight the Indian atrocities.

ISLAMABAD – The spokesperson of the Foreign Office Dr Mohammad Faisal Sunday reminded India to accept its failure in ...

Special functions will also be held in all educational institutions across the province to express solidarity with the innocent Kashmiri people who are struggling for their right to self-determination.

Like other parts of the country, Kashmir Solidarity Day will also be observed in Balochistan. In this connection, a number of programmes have been chalked out to mark the day and express solidarity with the Kashmiri brethren.

In Gilgit Baltistan, protest rallies will be carried out today in connection with Kashmir Solidarity Day. In Gilgit, the main protest rally will be taken out from High School No1.

Speakers on the occasion will condemn atrocities being perpetrated on innocent Kashmiris who are struggling for their inalienable right to self-determination.

Kashmir Solidarity Day will also be observed in Sindh province like other parts of the country. Rallies will be carried out in all cities including metropolitan Karachi to highlight the struggle of Kashmiris.