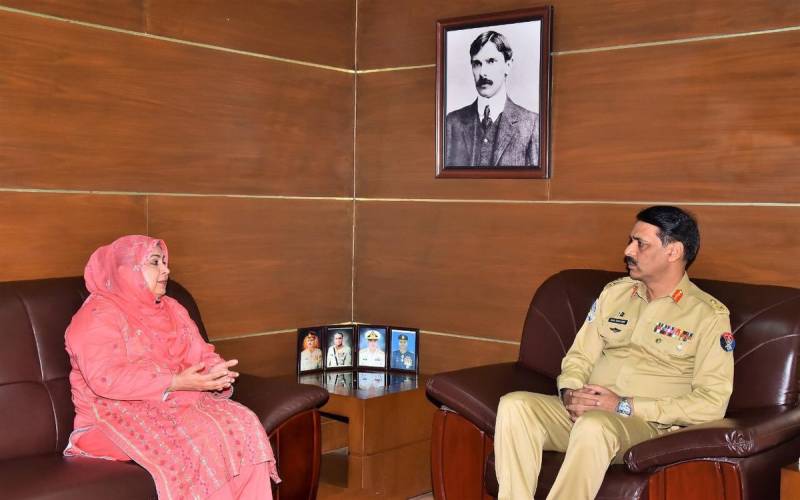 According to ISPR the issue of missing persons was discussed in the meeting.  Asif Ghafoor said that the responsibility of all missing persons does not lie with the state as many such individuals are either involved with militants in conflict zones or have been killed fighting against the state.

Not every person missing is attributable to state. Many are there as part of TTP in Afg/ elsewhere or got killed fighting as part of TTP. Those with state are under legal process. She pledged that affected families shall not allow any anti state force to exploit them.(2of2). pic.twitter.com/DugYN1o1CC

The DG ISPR said during the past few years Pakistan faced a difficult situation and then it successfully came out of that. He said the government in collaboration with security institutions was trying to take the issue of missing persons to its logical conclusion.

Met Amina Masood Janjua. Issue of missing persons discussed. State is with them to facilitate and address the issue. COAS has constituted a spec cell at GHQ for assisting the process. Our hearts go with the families of missing persons being Pakistanis. (1of2). pic.twitter.com/O5nI4hJ5Kc

He said a special cell had been constituted as per directions of Chief of Army Staff, General Qamar Javed Bajwa to solve the issue of missing persons.

He said Judicial Commission was also constituted on the issue of missing persons and many developments had been in this regard, adding that their number was quite low now as compared to initial figures.

“Our hearts go with them (families of the missing persons) as to how we can lessen their difficulties. We want to take them to the point from where they can start a normal life again,” he added.

Amina Masood Janjua acknowledged efforts by the government and security forces. She said Pakistan had sacrificed 80,000 lives for peace. She said the platform of Defence of Human Rights would not be allowed to be used by anti-state forces.

She said the issue of missing persons would be resolved while reposing full trust in the country’s institutions. “I am really thankful that work on the issue is already in progress and a committee has to be formed for that purpose,” she added.