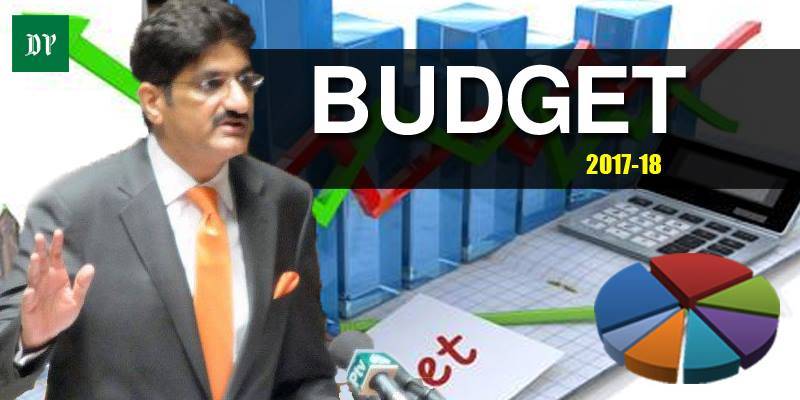 Shah, who also holds the portfolio of minister for finance, delivered the budget speech at around 3pm after Sindh cabinet approved budgetary estimates for the upcoming financial year and revised budget for the outgoing fiscal year 2016-17.

According to Shah, education will get the largest chunk of the budget in the upcoming fiscal year than ever before. He said nearly 49,000 jobs have been created for the next financial year.

Murad also said the government would not be introducing any new tax for the fiscal year.

Receipts from the province's own sources including tax and non-tax receipts are estimated at Rs199 billion, the chief minister said.

For the next financial year, the target of Sindh Revenue Board is being enhanced to Rs100bn as per the Sindh Tax Resource Mobilisation Plan.

Education’s got the lion’s share of Sindh budget 2017-18, as Rs202 billion have been set aside for this sector.

A total of Rs100 billion has been allocated for health sector.

Development expenditure for fiscal 2017-18 has been set at Rs274bn.

CM Shah stated that the share of road infrastructure in the Annual Development Programme will be increased from Rs15.54bn to Rs25.77bn for 2017-18. A further 5bn has been allocated for the repair of roads, he said.

Among major developmental projects, Karachi-Thatta Dual Carriageway is to be completed by the end of this calendar year at the cost of Rs8.85bn, the CM said.

Shah also stated that Rs5.5bn have been allocated for solid waste management while Rs71bn will go to local councils.

A 10% raise has been proposed in the salaries and pensions of provincial government employees.

Rs92.91 billion have been allocated for law and order in the province.