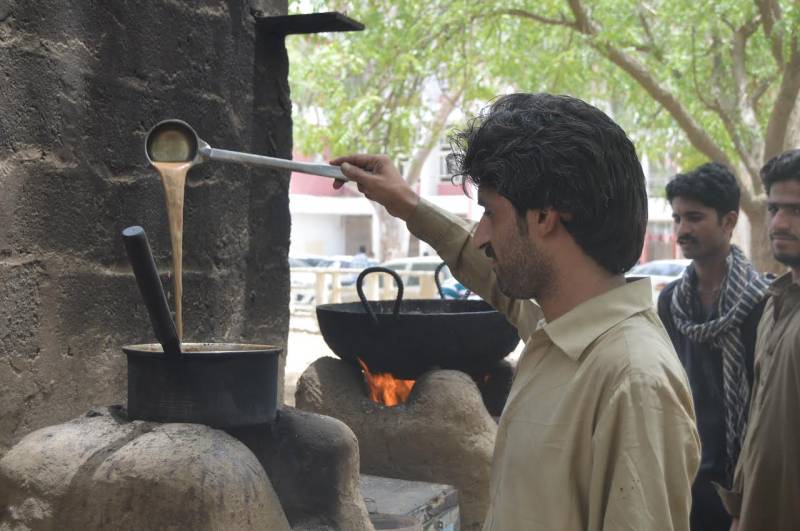 It was a bright sunny day of April 2017 and the university clock had just struck 11. 30 am,  we walked from the Magsi Canteen just opposite of Arts Faculty Building at main campus of Sindh University, when we saw groups of students sitting in the open air canteen chatting, panting and joking, in some groups there were girls also. Suddenly a shout resonated in our ears that took all our attention, as someone had shouted in pure upper Sindh dialect: "Magsi char cut kahani aaa!" (Magsi! bring four half/cut cups of tea).

This one sentence took us back to our student days at the very same university. Sindh University might be famous for many other things, but one among them that makes it unique is, the cutting culture of steamy hot tea. When a new-comer to university puts a cup of tea to his/her lips after ordering it in the peculiar style, such an act gives him/her pleasure as though he/she has won the whole world, and brings a smile of delight and joy to his/her face. This inspired us to write this piece on such unique culture of Sindh University commonly known as cutting/half tea culture. We aimed to ask a certain number of questions about tea, its quality, price and atmosphere at Sindh University from several students of different departments. 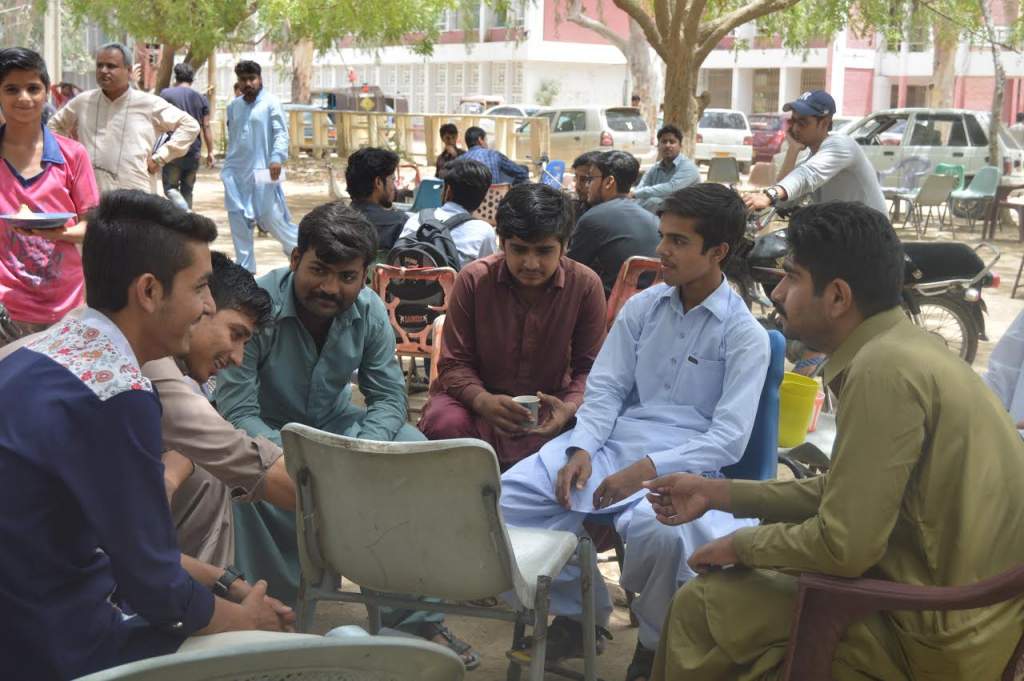 Every university in the world has its own distinctive cultural characteristics. And it may be the culture of that university which attracts and appeals to new students for taking admission and studying there. In this way, the University of Sindh, Jamshoro, the second oldest university in Pakistan, currently having approximately 32000 students, has also its own unique culture which appeals to the students not only from all over the Sindh but from across Pakistan and beyond.

"Everyone wants to pay the bill to show the respect and hospitability, to cut the expenses they opt for a cut (half cup of tea) since many of the students face financial problems, an average cup of tea costs Rs. 30, while a cutting is half the price."

They came up with different reasons behind having a half cup of tea. Some of them were of the opinion that being Sindhis they are told to be hospitable people and give everything for comfort of their guests, so whenever friends meet, everyone wants to pay the bill to show the respect and hospitability, to cut the expenses they opt for a cut (half cup of tea) since many of the students face financial problems, an average cup of tea costs Rs. 30, while a cutting is half the price. Financial problem is one major reason, but that doesn't affect the sales of tea. While conducting a survey for this piece at the main campus of the university, we came to know that there are several tea canteens like one at Institute of Sindhology, five canteens at Arts faculty, two more than seven canteens at boys' hostels, one inside the Arts Faculty  Building and four canteens outside English Department.

Some of the students told that though they are not very fond of having tea but they enjoy the company of their friends, sitting at tea canteens and cabins. Hence they just fulfil the requirement of sitting there and order half cups of tea, and bunk the classes. The students said over half cup of tea to discuss, their classes, education, politics, current affairs, the atmosphere of the university and sometimes the evergreen topic of discussing their and others’ romantic relationships. 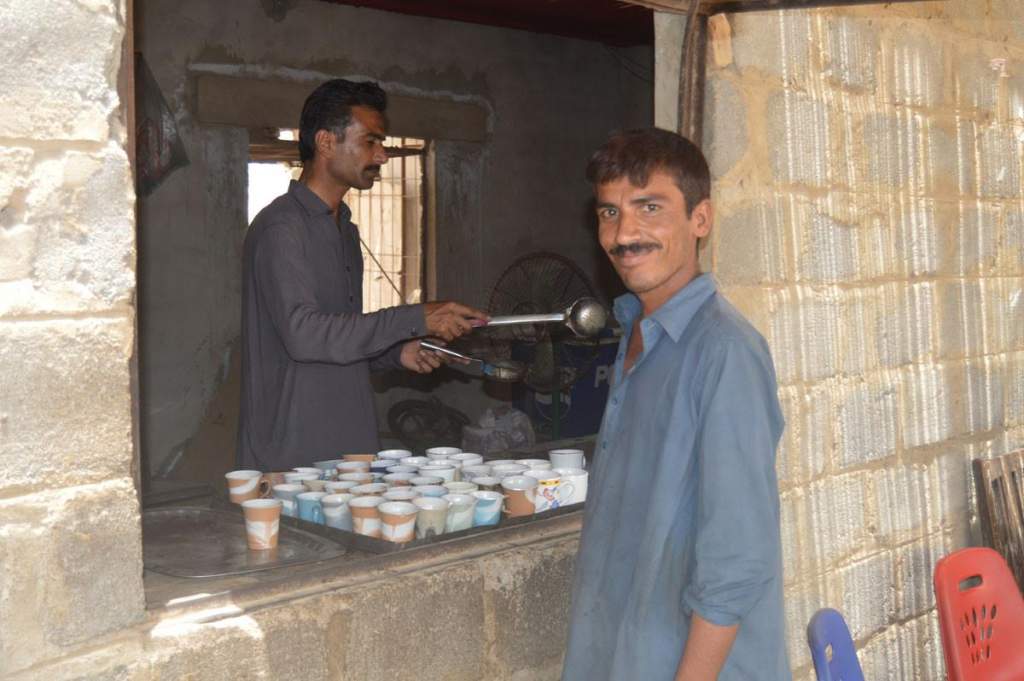 We sat with a group of students and asked them about consumption of tea on campus, they said that many bachelor students take tea at morning as they enter the campus, since they don't take breakfast, so tea is the best option before entering the classes that sometimes could be boring to death, while others take tea after classes for relaxation. They said that few canteens here a famous like the 'Magsi Canteen', 'Gol Canteen' at Arts Faculty Building, and canteens at Institute of Sindhology. When asked about the quality of tea, the students said that they are not satisfied with the quality of tea, as low-quality tea-leaves are used; more water is used than milk while making tea, so there is huge problem of hygiene. But even so, they enjoy having half cups of tea at the campus because they prefer the company of their friends more instead of having a cup of quality tea alone. On the other hand, students living with families, who mostly come from Hyderabad and its adjoining areas, take tea most probably in the noon, after the morning classes. Along with tea students opt for samosas, biscuits and light refreshment that is hardly available on every canteen, but samosas of Chacha Qasim’s canteen are famous in entire university and students from different departments gather at this particular canteen to taste samosas with spicy chutney.

The tea-loving students shared that they don’t enjoy tea in congested cemented canteens, which are to be found in certain departments of the main campus, rather they enjoy tea in open space, under trees, sitting on half broken benches or chairs having three legs, after narrow classroom situation, it is more refreshing and relaxing to sit outside in open air rather than sitting in a congested cabin. 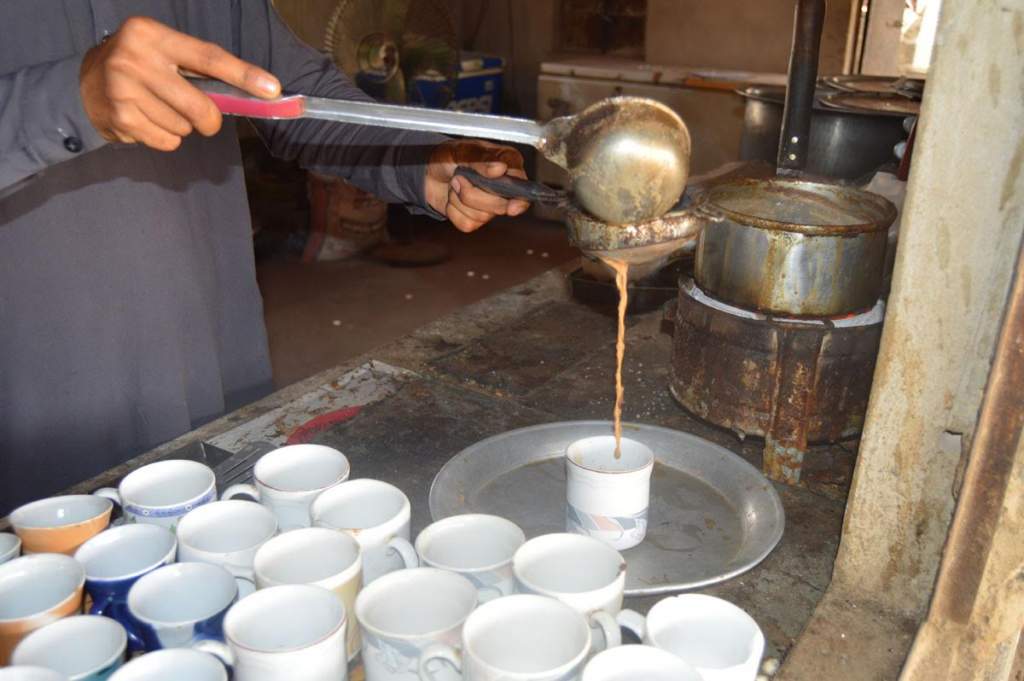 Overall the students who take tea at the campus could be divided into following categories, (a) bachelors; those who need to have breakfast, (b) company seekers; those need place to have company at cabin or canteen; however, and (c) tea imbibers; such category of students who may be termed as tea addicts or imbibers are to be found less. Rather the students expressed that after taking classes they get tired and then to have their mind refreshed and slashing the level of tiredness they enjoy taking tea and having a chit-chat about light topics.

In spite of the fact that students were not satisfied with the quality of tea and the canteen do not provide clean drinking water, however, students were of the view that they enjoy a lot having chit-chat with their class companions and university fellows while sipping tea at shanty canteen and tea cabin because such gathering provides them a chance to express their remarks about issues of every type from study matters to romantic relationships. And such moments the students say would be in their memory forever; these moments are unique and matchless. No matter how hot the weather turns, or whatever happens in outside world, students of Sindh University love to enjoy a cut cup of tea in an open air canteen, while the tea business keeps on flourishing even during hot summer days. This has become the cultural identity of Sindh University and no one could separate it, for it is the beauty and charm of four years at Sindh University. As the great Sindhi poet Haleem Baghi has claimed in a couplet: