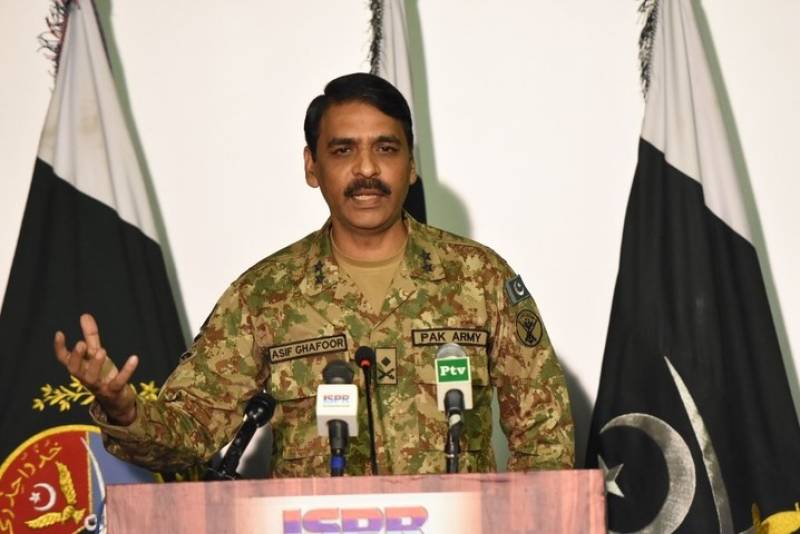 "In the east, we have a border with India which is unsafe because of India's inappropriate reactions," Director General Inter-Services Public Relations Maj Gen Asif Ghafoor said at a press conference in Rawalpindi. His presser follows a visit to Kabul by Chief of Army Staff Gen Qamar Javed Bajwa on Sunday.

"Ceasefire violation in 2017 are larger than any other year before this, with 222 civilians killed along the Line of Control. But India has also paid a price with our response and we will continue to do so [respond] if it does not act with restraint."

"Threats from India are perpetual. We are a peaceful country and we do not want war with them, but we will defend ourselves and have the capability to do so," he cautioned.

The DG ISPR said Pakistan had ongoing coordination and contact with Tehran. "The army chief will soon visit Iran to improve relations," he said.

“Mercy petition of Kulbhushan Jadhav is reaching its final stage. Will give good news soon,” the ISPR chief said while responding to a question on Indian spy who was caught in Pakistan.

Responding to cross-border firing at the Line of Control, he said: "Unlike India, we cannot fire indiscriminately as there are Kashmiri brothers on the other side as well, so when there are casualties on that side, it is soldiers and infrastructure. But war is not the solution, so we are talking to them at all levels to stop this."

Responding to a question about rumour of a possible military coup in the country amid the ongoing political crisis, the military spokesman said such things should not even be talked about.

“It is wrong to give such an impression that a martial law is being imposed,” he clarified.

When asked why there had been no press release issued following a special corps commanders conference at GHQ, he responded: "Silence is also an expression."

Explaining the issue of Rangers deployment outside the accountability courts on Monday, he said that the Rangers fall under the Interior Ministry. Three wings of Rangers were requisitioned under Article 147. Once this happens, there is local coordination. This has been happening since 2014 and is refreshed every three months."

ISLAMABAD - After Rangers withdrew its personnel deployed for the security of the parliament, Frontier Constabulary ...

"Sometimes it happens that police ask the Rangers for assistance, and they take action. When the National Accountability Bureau had its first hearing, there was some trouble when the former prime minister was appearing. A letter was written to the Rangers, and there was some coordination in the night as well, so the Rangers reached the court at 7am," he explained.

"If a soldier is doing his duty and is told not to allow irrelevant people... It is possible that someone who did not have a card was a relevant person, but Rangers personnel do not know. Even if the army chief does not have a card, he is informed by personnel that he is not allowed [to pass]."

"We need to appreciate the personnel for their duty."

"Any type of instability, either political, economic or developmental, cannot be in country's interest, so [the matter] needs to be resolved," the ISPR head said, adding that coordination is better than confrontation.