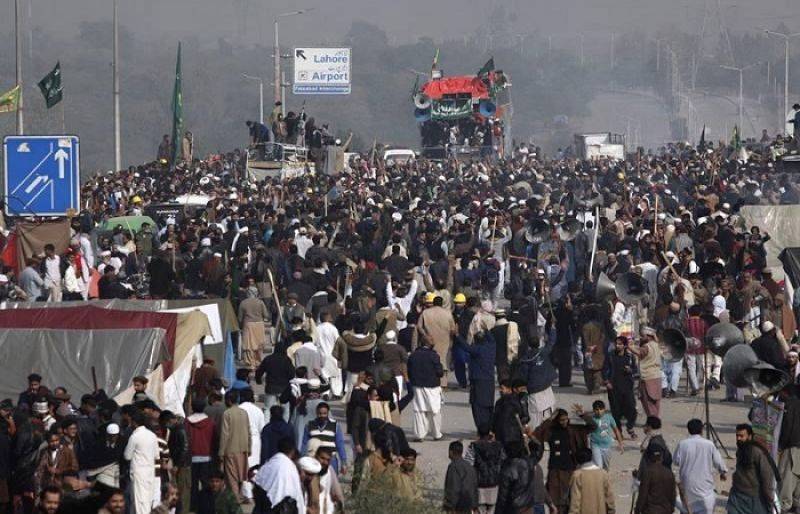 ISLAMABAD - The Supreme Court of Pakistan on Wednesday issued a written verdict on a suo motu case of the sit-in staged at Faizabad Interchange in 2017, by the Tehreek-e-Labbaik Pakistan (TLP) directing the government, law enforcers, intelligence agencies to operate within their mandate.

Justice Qazi Faez Isa announced the verdict and said, "It is tough to announce a decision of a suo motu case."

The bench today did not read out the verdict in court, announcing instead that a written copy of the verdict would be uploaded onto the apex court’s website.

ISLAMABAD - The Supreme Court of Pakistan expressed anger on Friday over the absence of the Attorney General of ...

The verdict published on the website read, "It would be apt to conclude this judgment by quoting Quaid-Azam Muhammad Ali Jinnah: I consider it my duty to call upon the Muslims to temper their resentment with reason and to beware of the dangers which may well overwhelm their own State. Should they allow their feelings of the moment to gain mastery over their actions. It is of utmost importance that Pakistan should be kept free from disorder because of the outbreak of lawlessness… is bound to shake… its foundation and cause irreparable damage to its future. I pray to God that He who has bestowed on us this great boon of a sovereign State may now give our people courage to… preserve intact the peace of Pakistan for the sake of Pakistan."

The judgment further read, "Every citizen and political party has the right to assemble and protest provided such assembly and protest is peaceful and complies with the law imposing reasonable restrictions in the interest of public order. The right to assemble and protest is circumscribed only to the extent that it infringes on the fundamental rights of others, including their right to free movement and to hold and enjoy the property."

The court asserted that "protesters who obstruct people's right to use roads and damage or destroy property must be proceeded against in accordance with the law and held accountable".

ISLAMABAD - The Supreme Court of Pakistan expressed anger on Friday over the absence of the Attorney General of ...

The two-judge bench urged, "The State must always act impartially and fairly. The law is applicable to all, including those who are in government and institutions must act independently of those in government."

In November 2017, the SC had taken suo motu notice of the three-week long sit-in, which was held against a change in the finality-of-Prophethood oath. The government termed the change as a clerical error when the government passed the Elections Act 2017. Later on, the sit-in was called off by the TLP leadership after they reached an agreement with the government.

On Nov 22, 2018, SC bench, comprising of two-judges, Justice Qazi Faez Isa and Justice Musheer Alam had reserved its judgement and closed the hearing of the case, initiated on a suo motu on Nov 21, 2017 --- dished out severe criticism to the attorney general, media regulator and other stakeholders.

Last year in October, TLP leaders were arrested after they launched another sit-in following the Supreme Court judgement of acquitting Asia Bibi in a blasphemy case.