Pakistan vows to continue efforts for cooperative environment in region 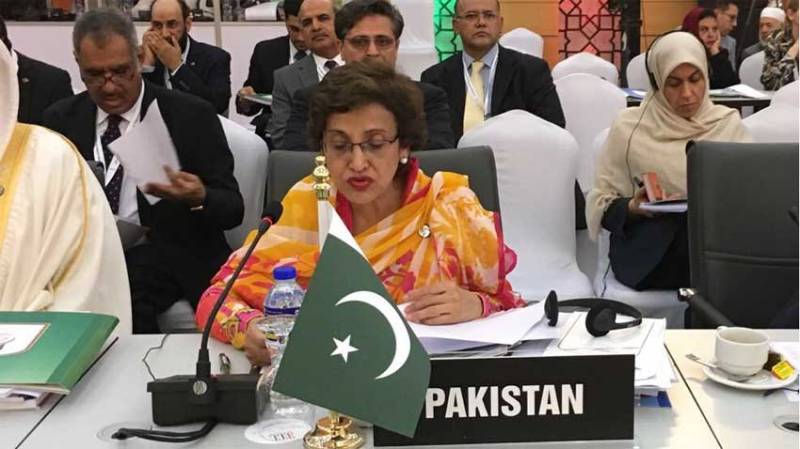 DHAKA - Foreign Secretary Tehmina Janjua says without resolving disputes, the dreams of economic growth and stability in the region and beyond will remain unfulfilled.

She said this in her speech at the 45th session OIC Council of Foreign Ministers in Dhaka, Bangladesh with the theme "Islamic values for sustainable peace, solidarity and development".

She said development is closely linked with peace and security and our efforts towards sustainable development must be synchronized with efforts for lasting peace.

Referring to the long-standing unresolved disputes of Kashmir and Palestine, she said it is vital to unify our ranks and evolve an effective strategy to ensure that the universally recognized ideals of liberty, freedom and justice are accorded to the people of Palestine and Kashmir.

She stressed that the Muslim world should overcome their political differences, invest smartly in their people, promote science and technology and muster the political will to shape words into actions.

The foreign secretary also highlighted Pakistan's sacrifices in the war against terrorism and its unique distinction and achievements in controlling this scourge.

Tehmina Janjua emphasized that OIC fraternity must redouble its efforts to coordinate more closely and reach out to important constituencies in the Western world to halt the negative developments that are aimed at defaming our religion.

She said Pakistan expresses full solidarity with the Rohingya Muslims and joins the international community in reiterating its strong condemnation of brutal violence and denial of legitimate rights of the Rohingyas.

About Afghanistan, the foreign secretary said Pakistan is deeply concerned over continued strife and instability in Afghanistan as peace and stability in that country is in the best interest of the region.

She said Pakistan is closely working with the Afghan Government and the international community for reconciliation and peace in Afghanistan and fully supports Afghan President Ashraf Ghani's initiative for dialogue with Taliban.

Both agreed to further strengthen bilateral relations in diverse fields.