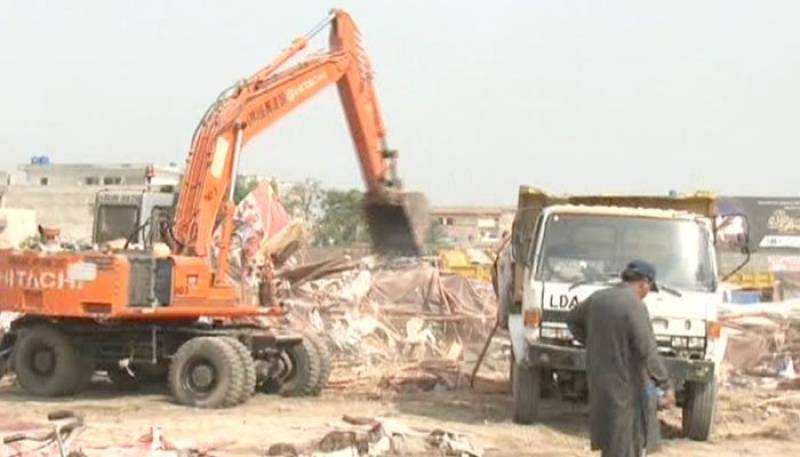 LAHORE - A high-level anti-encroachment drive launched in Lahore against land grabbers on Saturday has been halted for an indefinite period, local media reported.

The Lahore district administration stopped the operation following the uncertainty due to the arrest of the Pakistan Muslim League-Nawaz (PML-N) president Shehbaz Sharif.

According to the Deputy Commissioner Lahore Anwar-ul-Haq, “Operation will be re-launch keeping the current situation in view without any bias”.

He told media that the government has retrieved land worth Rs6.5 million during operation.

On October 2, the city district government launched a drive across the Lahore to retrieve land from illegal occupants and land mafia.

LAHORE - In order to retrieve land from illegal occupants and land mafia, the Lahore Development Authority (LDA) on ...

The LDA aimed at retrieving 31,687 kanal land owned by state, 280 acres land of forest department, 8 plots in the Walled City, 32 plots owned by MCL and 636 kanal land of LDA during the ongoing operations.

During the operations, a citizen whose shop was legally built suffered a loss of millions due to the negligence of the officials taking part in the drive.

The non-professional attitude of Lahore Development Authority (LDA) inflicted a massive loss of over 50 million to a Khyber Pakhtunkhwa-based (KP) person who ran business in the provincial capital.

According to an exclusive report by Daily Pakistan, a businessman’s shop was ruined after the LDA officials launched an anti-encroachment drive on the Ferozepur Road area.

LAHORE - The non-professional attitude of Lahore Development Authority (LDA) inflicted a massive loss of over 50 ...

The owner of the shop, Khan Electronics said that his shop was neither illegal nor it had encroached but the blunder of LDA officials caused him a loss of millions.

The owner, hailing from Northwest province, expressed that the officials of LDA came here to remove encroachments with a crane and broke all the wires connected to the main WAPDA line for electric supply.

The businessman further said at that moment the electric supply was cut off by Wapda side but the moment the supply was resumed, a short circuit (due to open wires) ignited a fire which ruined his valuables in the shop.