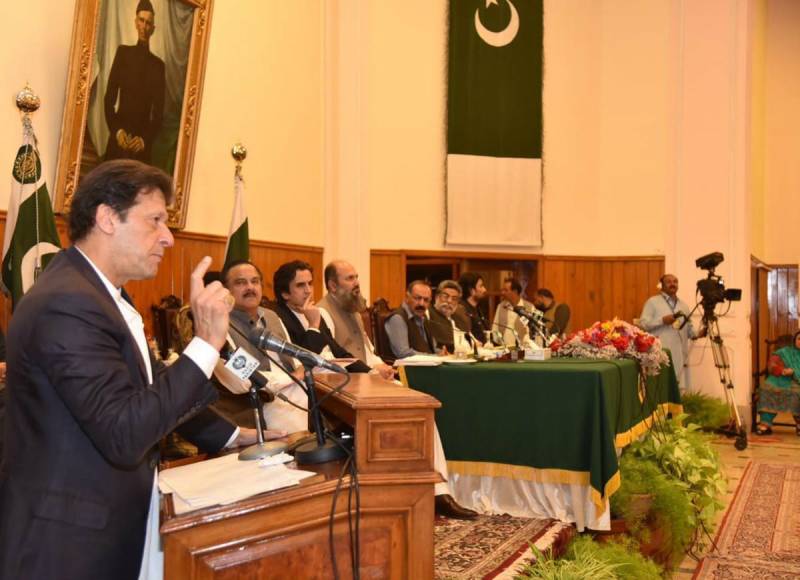 QUETTA – Prime Minister Imran Khan on Saturday vowed that the federal government will facilitate the Balochistan government through all means to raise human development level of the residents of the southwestern Pakistani province and set out on the journey to build a "Naya Balochistan".

"We will be there for you, whenever you need [us]," PM Khan assured Balochistan Chief Minister Jam Kamal in his address during his maiden official visit to Quetta since assuming office.

The Centre will provide the capacity that Balochistan lacks to bring about development that the province has long awaited, he added.

Khan urged the provincial authorities to bring a new local government system in Balochistan along the lines of what the PTI is introducing in Punjab and Khyber Pakhtunkhwa.

The premier highlighted Gwadar and its role in the China-Pakistan Economic Corridor (CPEC) is an "opportunity" that can bring immense benefits for the province if it is utilized wisely. He noted that 800,000 acres of land can be used for agricultural purposes if Balochistan is given its water share through the Kachhi Canal.

He also announced that the federal government will conduct a feasibility study on providing cancer treatment in Balochistan, so its residents do not have to travel to other cities.

Earlier in the day, Prime Minister Khan was received by Chief Minister Kamal on his arrival in Quetta for a day-long visit, according to the Government of Pakistan's official Twitter account.

Later, the PM and the Balochistan CM with key federal ministers visited the Pakistan Army's Headquarters Southern Command at Quetta Cantt. Chief of Army Staff (COAS) Gen Qamar Javed Bajwa received the PM at the Quetta Air Base to review the security situation of the province.

The premier was given a detailed briefing on Balochistan's security situation, challenges and responses. He was also briefed about the Khushal Balochistan socio-economic development program, the security of China Pakistan Economic Corridor projects and the progress of fencing along the Pak-Afghan border, according to a press release issued by Inter-Services Public Relations.

According to the ISPR, Gen Bajwa said that after the attainment of stability in the troubled areas of Khyber Pakhtunkhwa, the military's focus has shifted to Balochistan, "the economic future of Pakistan".

The premier acknowledged and appreciated contributions of security forces towards improving peace, stability and socio-economic development of the southwestern province, according to the military’s media wing.

PM along with CM Balochistan and lead ministers visited HQ SC. Briefed on security situation of the Province, challenges and response. “Having achieved stability in troubled areas of KP, lately our focus has been on Balochistan which is economic future of Pakistan”, COAS.(1of2). pic.twitter.com/3fRk9F7wXD

"The PM said that through a comprehensive national effort, cooperation between federal and provincial governments and the assistance of the army, we shall realise the true potentials of Balochistan. He said that only a cohesive national effort shall, God willing, take the provinces and the country to a destination of peace, progress and prosperity," the ISPR statement read.