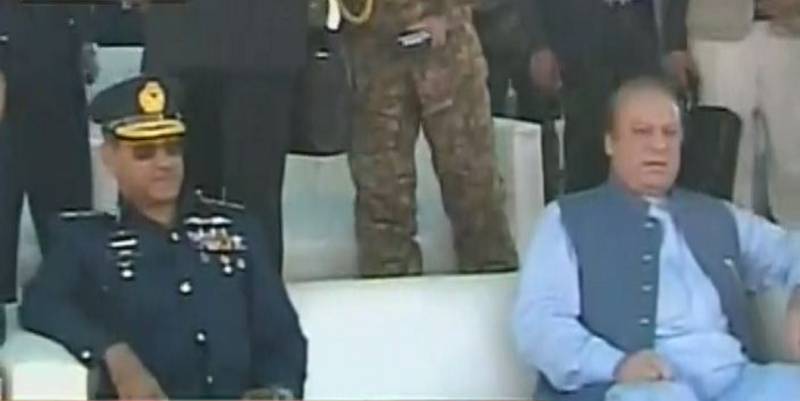 During the demonstration, PAF jets demonstrated fire power hitting the targets with pinpoint accuracy. Pakistan's JF-17 thunder warplanes also participated in the exercise which were held after a pause of 8 years.

Another video of fire power demonstration by PAF fighter jets in Sonmiani pic.twitter.com/rAtXn4dXAn

Speaking on the occasion. PM Nawaz Sharif praised the professional skills of the PAF pilots and other personnel. He went on to say that every pilot of PAF is MM Alam and Pakistani nation is proud of them. PAF is key element in counter terrorism operations of Pakistan which are acknowledged worldwide as effort in maintaining the global peace, the premier said.

Earlier on arrival in Karachi, he was received by Chief Minister Syed Qaim Ali Shah and other senior officials at the airport.

During the tour, the premier will also preside over a high-level meeting at Governor House to review law and order situation in the city.

Rangers and police officials will brief the prime minister and military chief about the progress made in the operation against criminals and terrorists and investigation of a gun attack on Military Police five days ago.

A decision about extension of Rangers' stay in Karachi wil also be made in the meeting.

Earlier on Sunday, Interior Minister Ch Nisar Ali Khan said that if Sindh Government did not send requisition for extension of powers for Ranger, they will be called back.