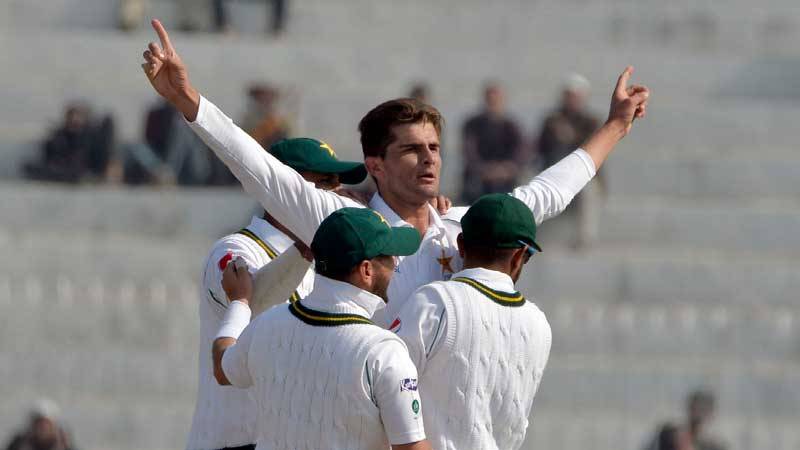 RAWALPINDI - Pakistan dismissed Bangladesh for 233 on the first day of the Rawalpindi Test on Friday.

Azhar Ali’s decision to bat first proved to be a favourable one as fast-bowlers Shaheen Shah Afridi, Mohammad Abbas and Naseem Shah shared seven wickets between them.

Shaheen was the best of the lot as he returned with figures of 4-53.

Earlier, Pakistan won the toss and chose to field in the opening game of the series.

Shaheen Shah Afridi struck on the third ball of the game as debutante Saif Hassan was caught out on a duck. Bangladesh then lost its second opener Tamim Iqbal who was trapped leg before by Mohammad Abbas for just three in the very next over.

The side, which started the afternoon session at 95-3, lost another three wickets and added 77 runs to its scorecard.

Najmul Hossain Shanto was dismissed right after lunch. Mohammad Abbas picked up his fourth wicket by getting the batsman caught behind by Mohammad Rizwan for 44.

The side were reduced to 107-5 after Mahmudullah was caught behind by Rizwan off Shaheen Shah Afridi’s bowling after scoring 25.

Mohammad Mithun and Liton Das anchored the side with their 54-run partnership before Haris Sohail got his name on the wicket taker’s list by trapping the latter leg before for 33.

The side started the evening session at 172-6. However, Mohammad Mithun (63 off 140) and Taijul Islam put on a 53-run stand which helped the side get past. The lower order failed to provide any significant contribution before getting dismissed.-APP