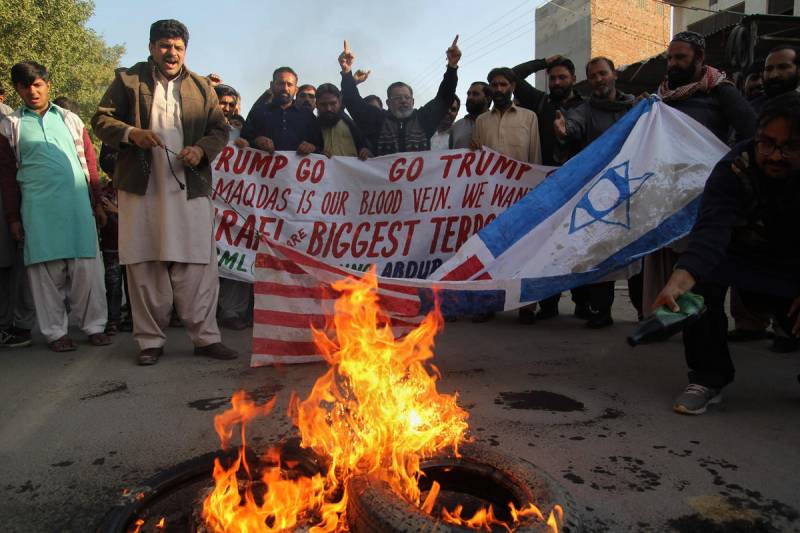 KARACHI - The security of consulates of United States in Lahore and Karachi has been ramped up due to calls by religious groups for country-wide protests owing to Donald Trump's decision to recognize Jerusalem as the Israeli capital.

The roads leading to American Consulates have been blocked by containers whereas strict security measurements have also been ensured to avoid any untoward situation.

In the federal capital, the Jamaat-e-Islami will show demonstrations at Aabpara, the Majlis-e-Wahdatul Muslimeen in G-6 and lawyers at the F-8 district courts.

Meanwhile, in Rawalpindi, a protest will be taken out at Choor Chowk.

In Karachi, the Majlis-e-Wahdatul Muslimeen will stage a protest in Nazimabad, the Jamaat-e-Islami (JI) in Banaras, Tanzeem-e-Islami at the Karachi Press Club and the Islami Jamiat-e-Talba (IJT) at North Nazimabad.

The religious parties led by Jamaat-e-Islami (JI) will be holding a protest in front of the American Consulate.

Moreover, Hafiz Saeed's Jamaatud Dawa  (JuD) will take out a protest at Chauburji.

Similarly, lawyers' bodies will take out a protest at GPO Chowk on Mall Road, located next to the Lahore High Court.

Earlier, JI chief Sirajul Haq said that the decision was likely to cause tensions in the Muslim world and that Trump was putting world peace at risk with such decisions.

Pakistan Tehreek-e-Insaf Chairman Imran Khan also denounced the move and expressed that it was a move to stir chaos in Middle-East.

Trump's plan to shift US embassy in Israel to Jerusalem is contrary to all UN resolutions & is an attempt to deliberately add to the chaos in the ME. This new Trump move will also undermine the international consensus on how to move forward in resolving the Palestinian conflict.