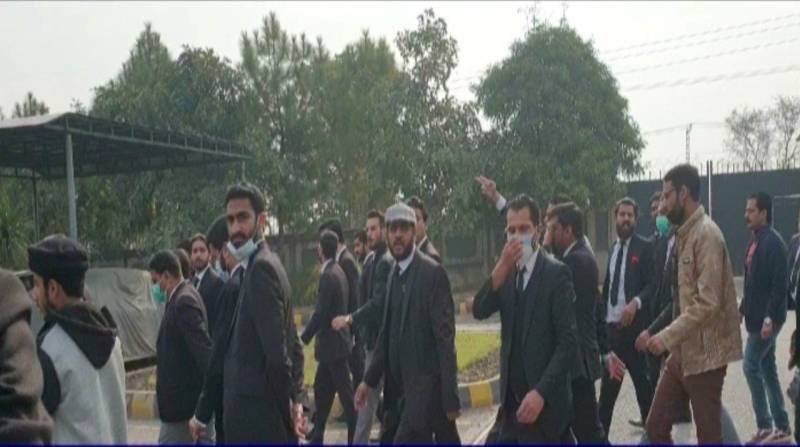 ISLAMABAD - Lawyers on Monday created ruckus at the Islamabad High Court (IHC) while violently protesting the demolition of their chambers by the Capital Development Authority (CDA) at the Islamabad judicial complex.

The mob broke windows in the Chief Justice block, besides chanting slogans outside the office of IHC Chief Justice in the complex.

The violent protest comes on the heels of the CDA’s Sunday night operation when it razed illegally-built chambers of the lawyers in the premises of the district and sessions court in Islamabad.

Security has been beefed up at the complex as Rangers troops have been deployed to control the situation while a service road leading the court has been closed.

IHC CJ Athar Minallah was reportedly forced to confine himself to his chamber as the protest erupted.

Justice Mohsin Akhtar Kyani urged the lawyers to opt for talks if they wanted to get their issues resolved, adding that violence will make the situation worse.

Till the time of reporting, talks between bar representatives and court officials are underway in the common room of the Chief Justice block.

High court judges, including the IHC CJ and the Islamabad deputy commissioner are preset in the room.

They lawyers have demanded immediate release of the their colleagues and restoration of their razed chambers.

They also asked for a transfer of the Islamabad DC and SP and a sessions judge.