Says every grain of wheat and farmers' interests to be protected 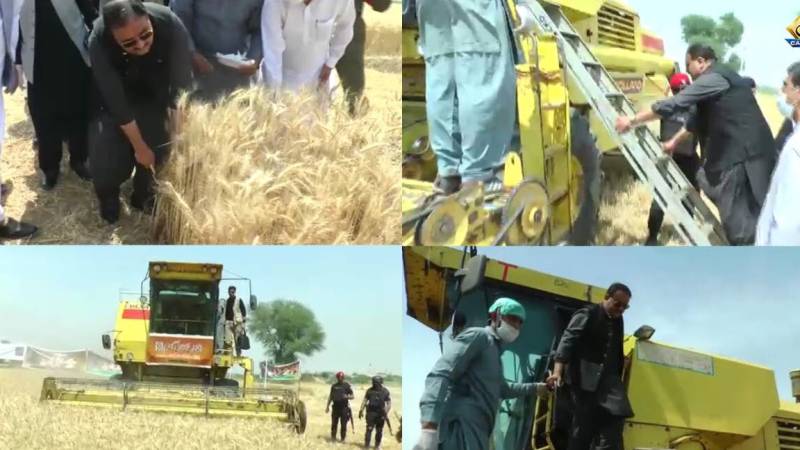 Buzdar himself operated combined harvester and later did it in traditional style by cutting standing wheat crop by hand after he reached Matwah village of tahsil Rojhan. He also performed Dua for success of the wheat harvest and procurement drive and to defeat the COVID-19 virus.

Exactly 4.5 million metric ton wheat would be procured during the ongoing wheat procurement drive and farmers would be made payments at the rate of Rs 1400 per Maund, said CM Buzdar while talking to a selected gathering of officials and farmers after formally inaugurating the harvest campaign.

The event was held amid full observance of social distancing and other measures meant for prevention of novel coronavirus, COVID-19.

The chief minister said the compulsion of 'Girdawri' has been withdrawn for the ongoing wheat procurement drive and ministers have been assigned districts to monitor the procurement process.

Buzdar said that fifteen (15) inter-provincial routes were also being monitored.

He said that farmers were the backbone of economy and our benefactors, adding that their interests would be protected at all cost.

He said the projects worth Rs 300 billion were being introduced in Punjab for farmers' welfare under Prime Minister's agriculture emergency programme.

Buzdar disclosed that a project worth Rs 12.5 billion has been launched to enhance per acre production of wheat.

He said that 400,000 bags of certified wheat seed was provided to farmers at subsidized price this year and announced to increase the number of seed bags to 1.2 million next wheat crop season, increasing it by 200 per cent.

He said that crop insurance scheme's scope has been widened and 250,000 farmers' crops have been brought under its ambit.

The chief minister also laid emphasis on measures to reduce cost of production for farmers well being and added that 5.2 million farmers benefited from Rs 8.5 billion subsidy on fertilizers.

The CM said that 10,000 water courses were being lined under a Rs 28 billion initiative.

He said that provincial government has so far introduced 80 new varieties of fruit, vegetables and other crops.

Unlike past, a complaint management system has been introduced in Punjab to process complaints properly and punish those involved in preparing and selling fake fertilizers and pesticides.

He said, Rs 15 billion worth interest-free loans were extended to farmers under e-credit scheme to expand agriculture base and improve financial standing of farming community.

He said that mechanized farming like application of combined harvester not only save time but also cost.

Secretary food Waqas Ali informed the CM that over 650,000 metric ton wheat would be procured in DG Khan division.

Secretary food further stated that wheat purchase has been prohibited without food grain license and added that people would not be allowed to purchase more than 1000 kilogram of wheat for personal use.