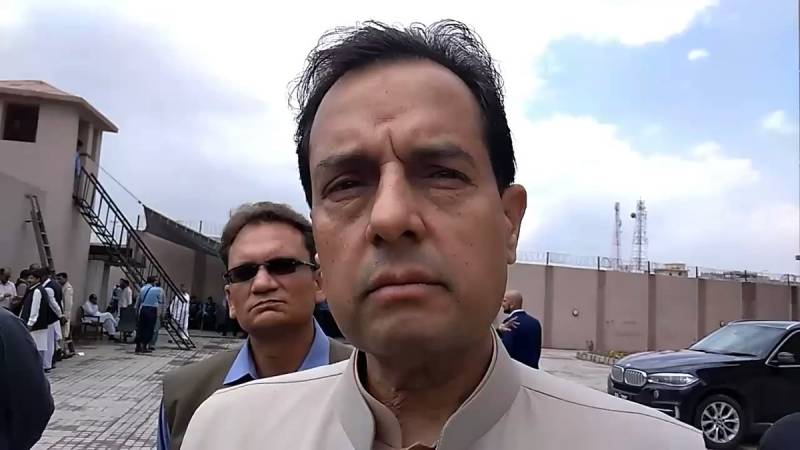 ISLAMABAD - Former prime minister Nawaz Sharif's son-in-law, Captian (r) Safdar, who was convicted in the Avenfield case, was shifted to the Adiala jail, Rawalpindi, on Monday where he will serve his one-year imprisonment sentence.

The National Accountability Bureau (NAB) officials produced the convict before the accountability court amid tight security after arresting him from Rawalpindi on Sunday. After his brief appearance, the court ordered to shift the leader of Pakistan Muslim League-Nawaz (PML-N) to the jail.

During the Safdar's court appearance, security officials did not allow the media persons to enter the federal judicial complex for coverage.

Local media citing sources claimed that Safdar will be housed in a 'B-class' facility, wherein he will be kept in a separate cell and allowed to keep a refrigerator, television and a personal helper.

Embattled Nawaz Sharif's son-in-law held a power show in Rawalpindi before surrendering to the authorities two days after being sentenced to jail in the Avenfield corruption reference. He was arrested from party’s office at Rawalpindi’s 6th road.

Safdar had been on the run to escape the arrest in his hometown Mansehra since the verdict in Avenfield reference was out on Friday.

On Friday, an accountability court sentenced Capt (r) Safdar to one year in jail for cheating while announcing the verdict in a corruption reference pertaining to Sharif family’s Avenfield apartment in London, UK.

Judge Muhammad Bashir also handed a 10-year sentence and £8 million (Rs1.29 billion) to Nawaz Sharif. He also sentenced Sharif’s daughter, Maryam Nawaz, to seven years in jail for forgery and making assets through illegal sources in the landmark decision. She has been ordered to pay a fine of £2 million (Rs320 million).

The three convicts were given one-year jail term, which will run concurrently, for not cooperating with the bureau during the probe into the case. In the light of this verdict, both Maryam and her spouse cannot contest elections, while Sharif has already been disqualified for life by the Supreme Court in Panamagate case.

The court also ordered forfeiture of their property in the Avenfield Apartments, Park Lane, London.

Following the verdict, the NAB has also obtained arrest warrants of former prime minister Nawaz Sharif and his daughter Maryam. NAB sources revealed that the former premier and his daughter will be arrested upon arrival to Pakistan from London.

Safdar’s name has been included in blacklist on Saturday as was feared to flee the country, the anti-corruption watchdog said.