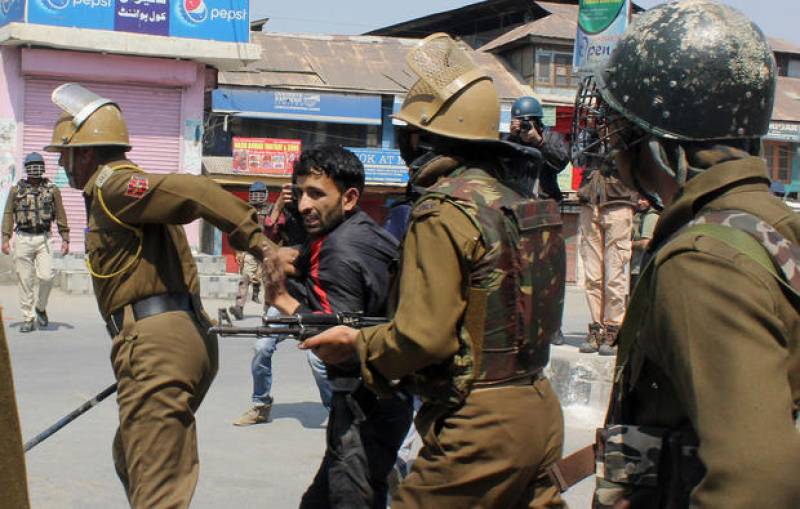 SRINAGAR - In Indian occupied Kashmir, Indian troops martyred one more youth during a fresh act of state terrorism in Kupwara district, on Monday.

Indian Army Spokesperson R K Panday confirmed that the operation in the area was under progress.

It is pertinent to mention here that earlier on June 29, Indian army had also claimed killing of three youth in an encounter, but it was later proved that the youth were killed by the troops in custody. The families of these youth including one Mudassar Ahmad Butt from Srinagar have raised the demand of their mortal remains.

SRINAGAR - The authorities in Indian occupied Kashmir have imposed curfew in Tral town of Pulwama district on the ...

Meanwhile, a camp of Indian paramilitary Central Reserve Police Force came under a grenade attack in Tral area of Pulwama district, day. The attackers fired a rifle grenade at the camp of CRPF 180 battalion in Tral town this morning, a senior police official told media.

The grenade, the official said, missed the intended target and exploded outside the camp with a bang. The police official said no one was injured in the grenade attack.

On the other hand, unidentified attackers barged into the house and shot and injured Shakeela Begum (45) with a sharp-edged weapon at Shahgund Sumbal in Bandipora district, late on Sunday night. The woman later succumbed to her injuries at a hospital in Srinagar. The deceased was wife of one Peoples Democratic Party worker Abdul Majid Dar.