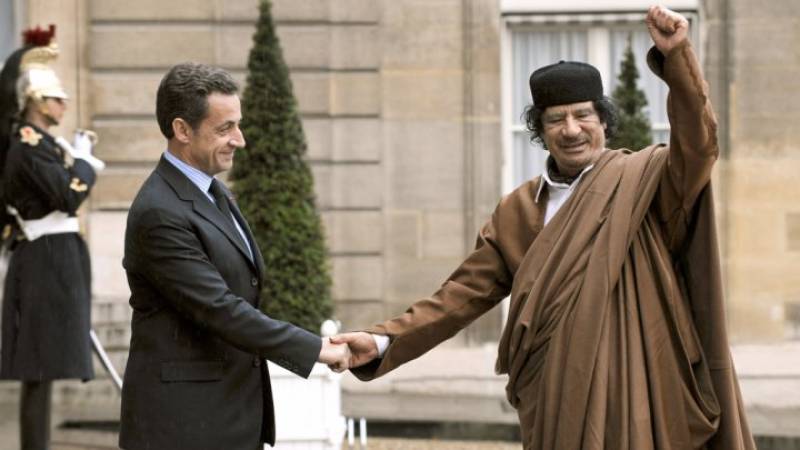 TRIPOLI (News Desk) - Recent documentary evidence has revealed that former French President Nicolas Sarkozy had received over €50 million from Muammar al-Qaddafi, who was killed in October 2011 after months of civilian unrest and violence supported by the airstrikes of western allied forces, including NATO members United States, Germany, Britain and France.

Before being killed, Qaddafi was accused of crimes against humanity at international forums like International Criminal Court and the UN Security Council.

However, in the past, NATO countries had enjoyed extremely close relationships with the former Libyan president, who was one of their major arms and sophisticated weapons buyers until 2007.

The evidence was first submitted to a a French court in December 2015 by a Lebanese-born businessman Ziad Takieddine, who has now leaked it to the media.

Takieddine had been working as a middle man between Libya and France, fixing all kinds of legal and illegal deals over the last 20 years. He is currently under a investigation for organizing and receiving kick-backs on illegal arms deals.

In his statement to the French court, Takieddine said that Muammar al-Qaddafi had exceeded the €50m in illegal payments to Nicholas Sarkozy while he was France's president.

Talking to French newspaper Le Parisien, he also expressed his readiness to present the proofs of Gaddafi’s alleged bribes to Sarkozy if an in-depth investigation was launched by France.

He claimed he had written proof that Sarkozy’s presidential campaign in 2006-7 was largely financed by Libya and these payments kept coming even after Sarkozy was in presidential office.

The same charges were previously leveled against Nicholas Sarkozy by Muammar Qaddafi's son Saif al-Islam in 2011.

However, a spokesman for the former French President has strongly dismissed the allegations, calling them a manipulated attempt to malign him.