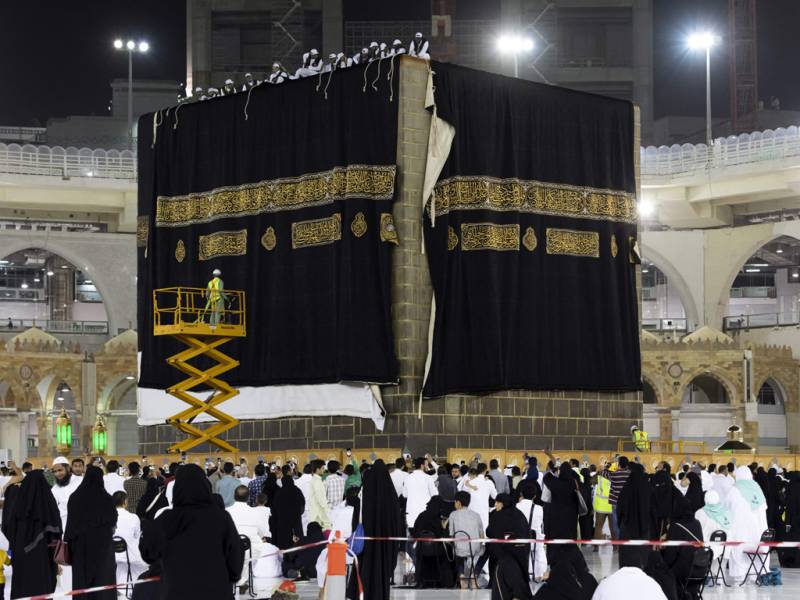 MAKKAH - The annual ceremony to change the Ghilaf-e-Kaaba (Kiswah) was held the other day (Friday night) at the Grand Mosque of Makkah (Masjid-Al-Haram) in Saudi Arabia whereas millions faithfuls converging at Mount Arafat Saturday to listen Hajj sermon.

The covering cloth of the Kaaba, known as Kiswa, is changed on 9th Zilhaj every year on the day of Arafat. The Kiswah, a heavy silk cloth embroidered with verses of the Holy Quran in golden embroidery.

The new Ghilaf has been prepared at a cost of seven million Saudi Riyal. While six hundred seventy kilogram pure silk, 120 kilogram gold and one hundred kilogram silver have been used in it.

It is the day pilgrims leave for the plains of Mount Arafat during the Hajj, a private news channel reported.

The pilgrims started heading towards Arafat after Fajr prayers where they would listen to Hajj sermon to be delivered from Masjid-e-Nimra.

They would stay at Arafat till the call for Maghrib prayer. After Azaan-e-Maghrib, the pilgrims will leave for Muzdalfa where they would offer Maghrib and Isha prayers at a time and would spend the night in the open sky.

Hajj is one of the five pillars of Islam and comprises a journey to Makkah to perform religious rituals described in the Holy Quran.