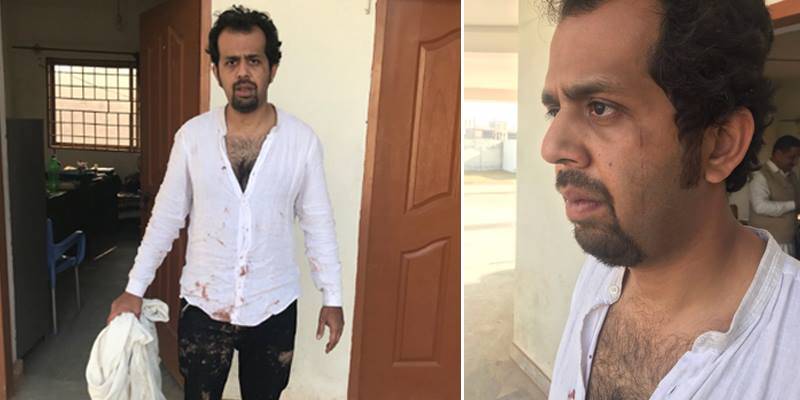 ISLAMABAD- A Pakistani journalist was assaulted by 10-12 armed men on Wednesday and escaped an enforced abduction attempt.

The news was shared by Siddique himself afterward using the Twitter account of Dawn News correspondent Cyril Almeida.

This is Taha Siddiqui (@TahaSSiddiqui) using Cyrils a/c. I was on my way to airport today at 8:20am whn 10-12 armed men stopped my cab & forcibly tried to abduct me. I managed to escape. Safe and with police now. Looking for support in any way possible #StopEnforcedDisappearances

Taha Siddique, Bureau Chief of online news website World Is One News and the country correspondent of France 24/7, was on his way to the airport when he was stopped by the assaulters. The journalist was beaten and threatened with death. Assaulters took all his belongings including his laptop, mobile phone and other documents of importance.

With @TahaSSiddiqui right now. It is a miracle that he escaped. He was beaten, threatened with death and his belongings taken.This is unacceptable. Journalism is not a crime. https://t.co/HXYnBctU9l

According to the sources close to Taha, the journalist was on his way to the United Kingdom for a work-related tour. Siddique was working on a project and had all the data related to the project with him when he was attacked.

After Siddiqui posted his message on Twitter, messages of support from journalists started pouring in.

"Journalist community must condemn the kidnapping attempt of Taha Siddiqui with full unity, no compromise on harassment of media," wrote Hamid Mir.

Fahad Desmukh showed his support for Taha with the hashtag #StopEnforcedDisappearances

Attempted kidnapping of journalist in the federal capital just a day after Supreme Court reprimanded Missing Persons Commission for being too slow. Someone got the wrong idea. #StopEnforcedDisappearances https://t.co/GtzTByROMN

Other supporters included Kay Johnson, WION, Douglas Schorzman and the list goes on.

I'm appalled to hear about the attack on @TahaSSiddiqui. The authorities could stop these assaults, so clearly aimed at muzzling journalism and free speech, and they must. #StopEnforcedDisappearances

.@TahaSSiddiqui was beaten and faced a kidnap attempt soon after this was published. Journalism is not a crime. #StopEnforcedDisappearances https://t.co/IG38dWYC4u

Was @TahaSSiddiqui ‘s escape a Pakistani intelligence agency failure? Someone in Pindi must be very upset right now! #StopEnforcedDisappearances

It's worth mentioning that, in less than 12 months, this is the fourth case of assault on journalists in broad daylight in the capital city of Pakistan.

in June 2017, unidentified men riding in a car and a motorbike attempted to kidnap senior journalist Azaz Syed. The police took up the case and barricaded all the roads but failed to get the suspected kidnappers.

In Sep 2017, senior journalist Matiullah Jan was attacked when two motorcyclists threw a rock and smashed his car's windscreen. He was traveling to Bhara Kahu from Islamabad with his children. No suspects were indicted.

In Oct 2017, senior journalist Ahmed Noorani was assaulted and sustained injuries when knife-wielding assailants attacked him. The Law Enforcement agencies again failed to find any suspects.

However, Pakistan is one of the worst when it comes to the safety of journalists. According to the World Press Freedom Index of Reporters Without Borders, Pakistan ranks 139 out of 180 countries.

Safety of journalists in Pakistan: #EndImputiny