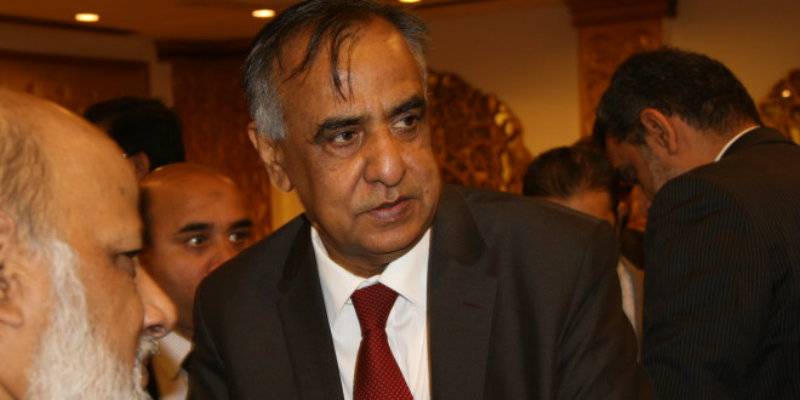 ISLAMABAD - The Supreme Court of Pakistan ordered the registration of a criminal case against the Chairman Securities and Exchange Commission of Pakistan Zafar Hijazi here on Monday.

The directives were issued after the chairman was found guilty of tampering with the record of Chaudhry Sugar Mills, owned by ruling Sharif family.

Attorney General argued before the three-member bench that according to FIA's report, SECP chairman tampered with the record.

Justice Aijazul Ahsan expressed that SECP chairman initially denied the allegations regarding record tampering and then said he was not aware of the tampering.

During today's hearing the top court issued multiple orders including contempt of court proceedings against Jang group for inaccurate reporting on the Panama case and publicising the name of the individual behind the photo leak of Hussain Nawaz.

ISLAMABAD - The Supreme Court of Pakistan issued a contempt of court notice to Pakistan's leading Jang group over ...

The FIA team submitted a 28-page inquiry report to the Supreme Court (SC) on Saturday, in which it endorsed the stance of the joint investigation team (JIT) probing the offshore assets of Prime Minister Nawaz Sharif and his family in connection to the Panamagate case.

The JIT had last month told the SC that not only have some governmental departments shown reluctance in handing over the relevant records required for their investigation, but some records had also been tampered with.

ISLAMABAD - A director of Securities and Exchange Commission of Pakistan (SECP) has revealed that the SECP record on ...

On Friday, the SECP commission held its first bi-weekly meeting since the arrival of the probe team.

The meeting was put off as long as the investigators remained on the SECP premises.

In his defence, Hijazi tried to turn the tables on his subordinates when he told the FIA team headed by FIA Anti-Corruption Wing Director Maqsoodul Hassan: “I have now learnt that some undisclosed witnesses have falsely deposed before the JIT that the case (pertaining to Chaudhry Sugar Mills) was prepared on my directions in 2016.”

In his reply, Hijazi has identified Mahmood as being responsible for the affairs of the relevant department, adding: “The SECP chairman is not supposed to examine each and every file, nor is any such exercise practically possible. He interacts with departments through concerned commissioners and relies upon the briefings given to him.”

Hijazi’s response also claimed there were no allegations of money laundering against Chaudhry Sugar Mills and any impression to this effect was given due to ulterior motives.