Pakistan to protect its vital interests at all costs: PM 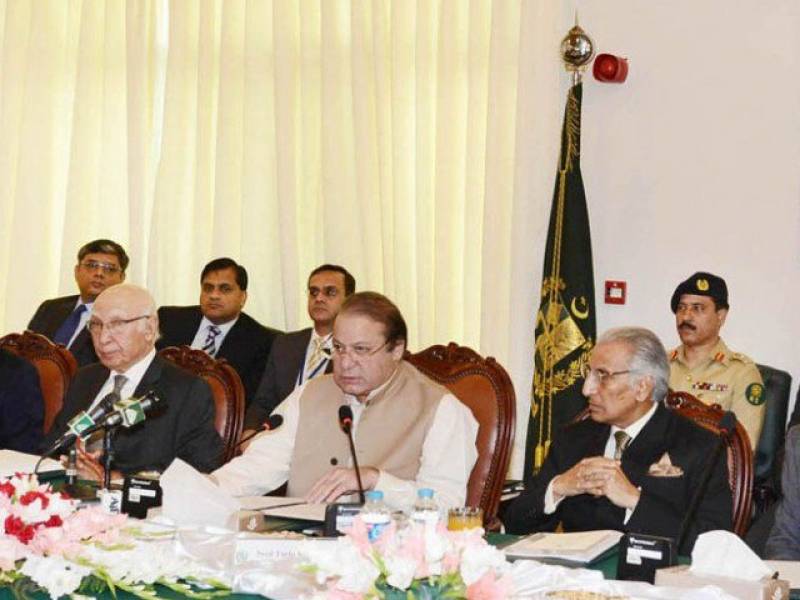 ISLAMABAD (Staff Report) - Prime Minister Nawaz Sharif has categorically stated that Pakistan will protect its vital interests at all costs.

Addressing Envoys Conference in Islamabad on Thursday afternoon, he said this should be taken as a loud and clear message.

The Prime Minister said entire Pakistani nation was dismayed over recent irresponsible and imprudent statements from the Indian political leadership. These statements have vitiated atmosphere and took us further away from our goal of regional peace and stability.

The Prime Minister said Pakistan will protect its interest but at the same time we will not abandon our high moral grounds in the face of provocations. We will not abandon the quest for peaceful neighbourhood but there should be reciprocity and acknowledgement of the overtures Pakistan has made to promote the dialogue process.

Nawaz Sharif said the issue of Jammu and Kashmir cannot be relegated to the backburner of history.

Prime Minister pointed out that only on last Tuesday during his meeting with the UN Secretary General in Dushanbe, he urged him to play a proactive role in promoting peace in the region.

The Prime Minister said he also reminded him that it was incumbent on the UN Security Council to ensure early implementation of its resolutions on Jammu and Kashmir.

Turning to Afghanistan, the Prime Minister said the two countries have moved closer and they have resolved to fight together our common enemy of terrorism.

He said last month he told Afghan President that the enemies of Afghanistan cannot be friends of Pakistan and that there are no good and bad terrorists and we will fight them all.

Operation Zarb-e-Azb has already taken down terrorists' networks, disrupted their command and control system and debilitated their supporting infrastructure. We are succeeding but it is still a long haul, as we take on all kinds of ethnic, communal and sectarian violence.

He said the National Action Plan, which enjoys consensus in the country, gives us the necessary framework to counter terrorism effectively and decisively.

The Prime Minister urged envoys to promote Pakistan as a destination for investment, trade, production and distribution.

He said we have embarked on the China-Pakistan Economic Corridor, which is a game changer for Pakistan and for the region.

He asked envoys to use their skills and ingenuity to create greater awareness about this historic initiative, dispel misgivings about it and harness resources that can augment our efforts.

The Prime Minister said it is time for SAARC and ECO to become connectivity backbones for South, Central and West Asia.