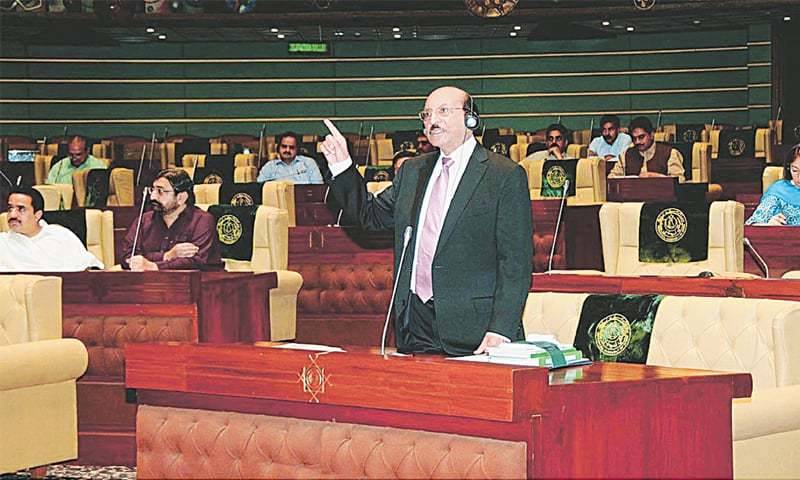 KARACHI (Staff Report) - The Sindh government is going to present its annual budget with a total outlay of Rs. 869 billion for the fiscal 2016-17 today (Saturday).

The budget will be presented at 11 am by Sindh Minister for Finance, Syed Murad Ali Shah. The Sindh cabinet in its special meeting on Friday approved a budget worth more than Rs. 865 billion for the fiscal year 2016/17.

The estimated deficit in the provincial budget for upcoming financial year would be between Rs. 13 and 14 billion.

Budgetary documents presented before the cabinet meeting showed a total estimated development outlay worth Rs. 265 billion, including a provincial Annual Development Programme (ADP) worth Rs. 200 billion and district ADPs worth Rs. 25 billion. Foreign assistance for development projects in the province would come to be around Rs. 28 billion.

Budget documents reveal Rs. 572 billion as current revenue expenditure and an estimated Rs. 166 billion as the province’s income through collection of various taxes. The Sindh government is also expecting an estimated share of Rs. 561 billion from the federation in the upcoming financial year.

The budget will allocate Rs. 150 billion for the provincial education department while the Sindh police and home department are expected to receive about Rs. 70 billion. The health department is likely to get about Rs. 55 billion.

The local government department is likely to receive Rs. 42 billion while Rs. 10 billion might be reserved for a special development for Karachi.

Total expenditure of provincial government is going up by 17.5 percent in budgetary estimates for the upcoming financial year.

In a statement, the parliamentary leader of opposition party Pakistan Muslim League-Functional Nand Kumar decried that the Sindh government in the current financial year had failed to spend around 40 percent of the development budget, reflecting the inefficiency of provincial administration and its ministers.

He suspected that owing to fear of the widened and accelerated accountability drive of federal agencies including the Federal Investigation Agency (FIA) and National Accountability Bureau (NAB), the political leadership in Sindh had failed to spend the development budget.

Meanwhile, Sindh Chief Minister Qaim Ali Shah, while presiding over the cabinet meeting, remarked that the leadership was conscious of the problems of the people and was even more committed to eradicating poverty and alleviating sufferings of the people.

Senior finance minister Syed Murad Ali Shah and secretary finance Sohail Rajput briefed the cabinet about the proposed budget for the next financial year and the recoveries of the Sindh revenue board and the excise and taxation department.

They said that almost all the recovery targets had been achieved, except for the target of Board of Revenue.

Moreover, on the suggestion of Chief Minister Qaim Ali Shah, the budgets for departments working for welfare of the society such as social welfare, special education, sports and youth affairs, minorities and women development have been increased.

Additional Chief Secretary Mohammad Waseem in his briefing said in the ADP there would be 1777 on-going and 996 new schemes.

He also highlighted new budget proposals of all government departments and said that under the sustainable development goals, priority schemes for important sectors like education and health had been allocated substantial budgets.