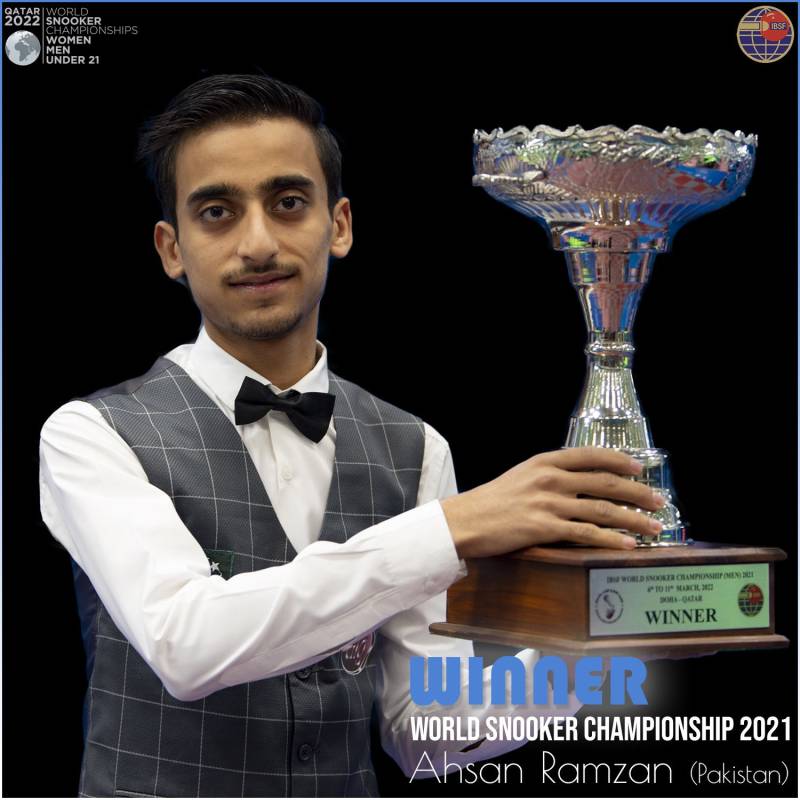 The Pakistani prodigy claimed the feat after defeating Sarkosh with 5-6 and becomes the third-youngest player to win the World Snooker Championship.

Young man with Big goals and dreams, you’ll go to heights with your talent!

Pakistan’s Ahsan Ramzan has won the final of the International Billiards and Snooker Federation, beating Iran’s Amir Sarkosh in Qatari capital on Friday.

Earlier, he made it to the finals after defeating another Pakistani cueist and defending World Champion Mohammad Asif in a thrilling contest in the semi-finals by 5-4.

Ramzan, who has U-16, U-17, and U-18 titles under his belt, was placed in Group C with Sri Lankan and Russian players. He earlier defeated all of them, clinching nine frames while losing only two.

He was placed in Group C with Kadian, Sri Lanka’s Al Fahim Kamaldeen and Russia’s Kirill Zhizduk. He defeated all of them.

Ahsan left his education in Grade 8 and turned to professional snooker after the demise of his father three years ago. He already lost his mother at the tender age of four.

The Pakistani cueist etched his name in the annals of the game by becoming the youngest ever men’s finalist but was unlucky to create another history of winning all five national titles.

Meanwhile, snooker players from the South Asian country will now take part in the 37th Asian Championship that is set to start after the IBSF World Championships from March 12.