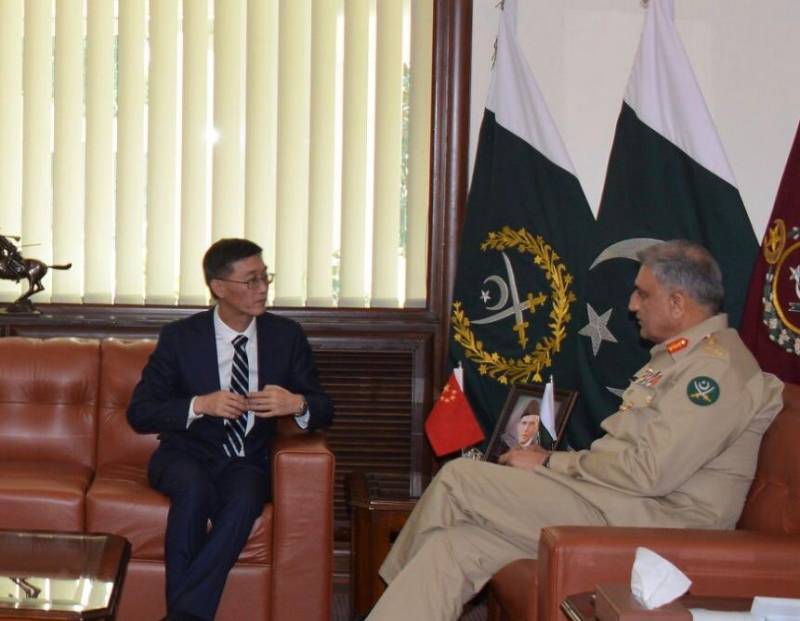 RAWALPINDI - Chief of Army Staff General Qamar Javed Bajwa has said that China Pakistan Economic Corridor (CPEC) is the economic future of Pakistan and its security shall never be compromised.

The army chief made this statement in a meeting with the Chinese Ambassador to Pakistan, Yao Jing, who called on the top general at General Headquarters (GHQ) on Tuesday.

China’s Amb to Pak met COAS. Discussed matters of mutual interest & regional security. Amb appreciated conduct of successful visit of Chinese Foreign Minister and support for CPEC in Pak. COAS reiterated that CPEC is eco future of Pak and its security shall never be compromised. pic.twitter.com/fn2pxLBk39

The army chief’s statement regarding CPEC came a day after Financial Times (London-based) newspaper said that Pakistan reconsidered its agreement with China for One Belt One Rode (OBOR) initiative.

The story published in FT had claimed that Pakistani ministers and advisers said the newly-elected Pakistan Tehreek-e-Insaf (PTI) government will review ‘BRI investments and renegotiate trade agreements signed more than a decade ago that it says unfairly benefits Chinese companies’.

A Chinese foreign ministry spokesman on Tuesday rejected a media report regarding a delay in the construction of China Pakistan Economic Corridor (CPEC), saying the Pakistani government had termed the project a priority for the country.

“We have noticed the relevant reports and also noted that the officials interviewed by the Financial Times have come forward to clarify it,” Geng Shuang said during his regular briefing.

ISLAMABAD - The Chinese Embassy in Islamabad said that a report published by the Financial Times regarding the China ...

He said the Pakistani Ministry of Commerce issued a statement saying that the Pakistani officials quoted by the Financial Times were out of context and distorted the original intention, and the Pakistani side refused to acknowledge the report.

The statement also pointed out that during the recent visit to Pakistan by Chinese State Councilor and Foreign Minister Wang Yi, the Pakistani side clearly stated that CPEC was a priority for the country, he added.

Earlier, PM Imran Khan had said that friendly relationship with China is the cornerstone of Pakistan’s foreign policy and that his government was committed to implementing CPEC.

Geng Shuang said the Pakistan-China relationship was unbreakable, and the Pakistani government’s commitment to the China-Pakistan Economic Corridor remained unwavering.

He said as everyone knew the China-Pakistan Economic Corridor was a major economic cooperation project carried out in response to the needs of the Pakistani side.

“The construction of the economic corridor has a good driving effect on the economic and social development of Pakistan,” he added.

The spokesman said at present, there were 22 cooperative projects under the framework of China-Pakistan Economic Corridor, nine of which had been completed and 13 were under construction, with a total investment of 19 billion US dollars, driving the annual economic growth of Pakistan by 1 to 2 percentage points, and creating 70,000 jobs for Pakistan.

At present, more than 130 countries and international organizations have signed ‘One Belt and One Road’ cooperation documents with China.