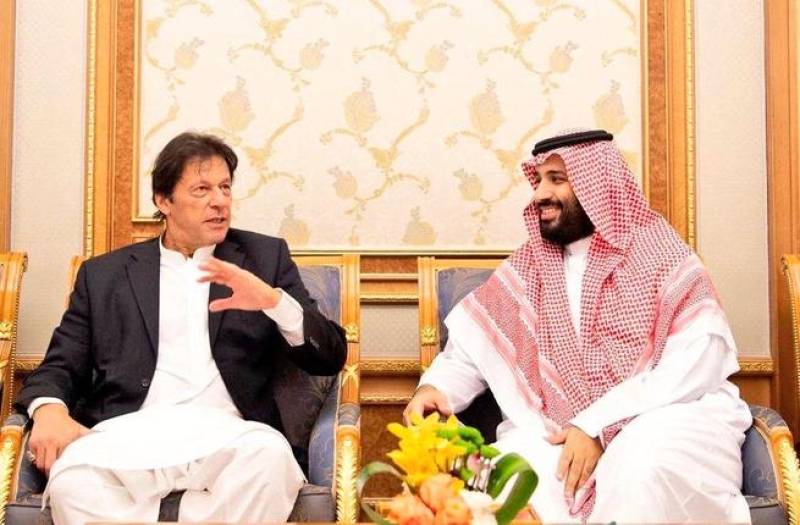 ISLAMABAD – Five trucks full of furniture and fitness equipment have reached the federal capital days before Saudi Arabia’s Crown Prince Mohammad bin Salman is set to touch down in Pakistan on his first state visit.

The 33-year-old prince will arrive in Pakistan with a big delegation on February 16, according to Saudi Ambassador Nawaf bin Said Al-Maliki.

Mohammad Bin Salman is scheduled to land in Islamabad on Sunday for an overnight stay, would be staying in the Prime Minister’s House while other members of his huge entourage would be lodged in local hotels and the Punjab House.

Two of the top hotels in Islamabad have been booked fully for members of his staff, while two others have been partially booked.

High security in place for MBS

His security team and Saudi media representatives have also arrived in the capital ahead of his visit on the invitation of PM Imran Khan. The vehicles to be used by the crown prince will reach here a day before his landing.

MBS will be the first state guest to stay at the government building reserved for the prime minister of Pakistan. He is expected to visit on afternoon and he will return on next day afternoon.

Pakistan army commandos will be deployed at important points during the visit of Crown Prince Salman.

Mohammad bin Salman, whose delegation will comprise about 1,100 officials and businessmen, will be the guest of honour at international investment conference scheduled to be held in Islamabad next week.

A 40-member Saudi delegation, and over 100 Saudi and Pakistani business leaders will attend the international event.

Negotiations will also be held to attract Saudi investment in Bahawalpur solar plants, and power plants in Haveli Bahadur Shah and Bhikki.

Pakistan is likely to sign a number of investment deals, including the construction of multi-billion-dollar oil refinery in the port city of Gwadar, during Crown Prince Salman’s visit. Both sides are ready to sign four memorandums of understanding (MoUs) worth $15 billion.

Saudi Arabia had already pledged a $6 billion package for Pakistan.

A private businessmen delegation of over 40 CEOs of Aramco and other giants would be accompanying the crown prince in his upcoming visit.

A delegation of the Islamic Military Counter Terrorism Coalition led by ex-Pakistani army chief General (r) Raheel Sharif arrived in Islamabad on late Sunday ahead of the crown prince’s visit.

This was the maiden visit of the Islamic Military Coalition to Pakistan and the delegation held meetings with PM Imran Khan, Foreign Minister Shah Mehmood Qureshi, Senate Chairman Sadiq Sanjrani, Chief of the Army Staff General Qamar Javed Bajwa and civil and military leaders during its two-day visit.

Besides the upcoming visit of Saudi Crown Prince Mohammad Bin Salman to Pakistan, the delegation discussed the strategy to counter terrorism with political and military leaderships of Pakistan.

After concluding his visit, Mohammad Bin Salman will pay a visit to neighbouring country at the invitation of Indian Prime Minister Narendra Modi. The Saudi crown prince will be accompanied by a high-level delegation, including ministers, senior officials and leading businessmen, on his first state visit to India.

India’s Modi met the prince in November, when they were both in Argentina for a Group of 20 summit. Though Saudi Arabia remains India’s top crude oil supplier, the two countries have expanded ties beyond energy, and their governments have agreed to build a strategic partnership, India's foreign ministry said on Tuesday.

“In recent years, there has been significant progress in bilateral cooperation in key areas of mutual interest, including energy security, trade and investment, infrastructure, defence and security,” the ministry said in a statement.