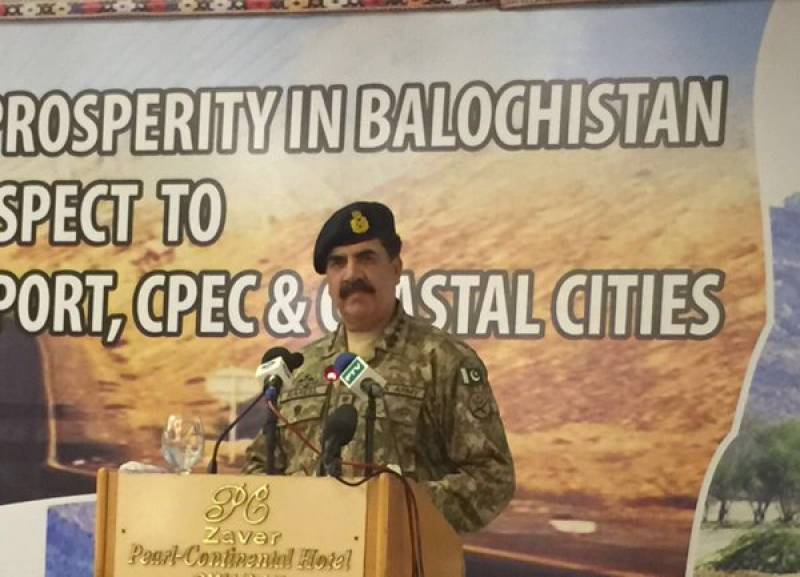 GAWADAR (Staff Report) - Chief of Army Staff General Raheel Sharif has said that  China-Pakistan Economic Corridor is indeed a corridor of peace and prosperity for the region and beyond, however Indian agency RAW is sabotaging the mega project.

Addressing a seminar titled "Development of Balochistan and Economic Corridor" in Gwadar, he said the corridor is the grand manifestation of the deep-rooted ties between China and Pakistan.

The Army Chief said the CPEC is a lifetime opportunity for Pakistan to improve the socio-economic equation of its underprivileged areas and populace.

Raheel Sharif said operation Zarb-e-Azb is aimed at breaking the syndicate of terrorism, extremism and corruption.

The Army Chief urged the international community to come forward in blocking external help to terrorist organizations, their facilitators, abettors and financiers. He said we will not allow anyone to create impediments and turbulence in any part of Pakistan.

Speaking on the occasion, Balochistan Chief Minister Nawab Sanaullah Zehri said no hurdles in the way of peace and prosperity of the province will be tolerated.

He said the provincial government and Pakistan Army are jointly working to establish peace in the province.