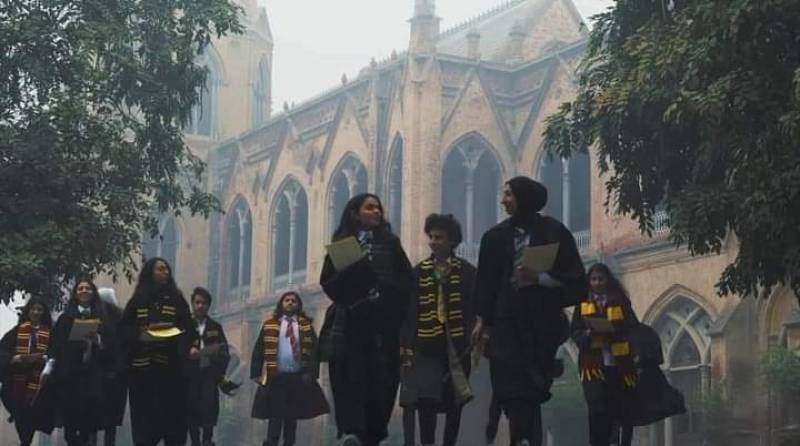 Oh, the moment you set your eyes on that tower and the awe it leaves you in!

Still holding on to the promised grace, sumptuous Government College, officially called GCU, stands majestically in the overpopulated city of Lahore. Time has failed to fade the reverence and wonderment of the main building.

Any Harry Potter fan can sense the weird resemblance between Hogwarts and GCU. All required was a fan movie, ‘The Last Follower and the Resurrection of Voldemort’. Khayaali Productions is a group of Ravians. The movie has been filmed in a manner that seems more of a tribute to the institute itself. The mythical aura and the magical architecture have done complete justice to the inspiration.

The eternal theme of good versus evil was played well. The elements of college life, ambition, and friendship embellished the plot. A somewhat mundane storyline was decorated with suspense, thrill, and light humor. Dialogue delivery depicted language skills and quality work. Pronunciation was noteworthy, yet captions were added diligently. As any Harry Potter movie requires, special effects and graphics were handled proficiently. The characters personified the natural predispositions and human traits. The costume design and overall get-up were simple and admirable. However, there should have been more efforts on the make-up. Background music and sound effects were fairly good. Keeping in mind that the movie was recorded with just one camera, and the crew consisted of only 15 people; Cinematography was laudable. The hall was in an uproar during the shows.

Coming to the practical aspects, it would have been a far better experience if the movie was premiered in the cinema halls of Lahore. It would have been more profitable and famous. Bukhari auditorium was not the best option. Sitting arrangements and the unmaintained hall made the experience less enjoyable. There was mismanagement at the hall entrance as there was no classification between old Ravians and current students. However, keeping in mind the trivial amount of tickets i.e., 300/person, it may be considered bearable.

Poetry, Literature, Arts, and especially Performing Arts seem to have vanished from the passionate walls of Lahore. Ever since the cramming of Lahore, true Lahoris have suffered through cultural change, and they yearn to enjoy quality entertainment. Covid-19 proved to be the final nail in the coffin. The absence of cultural celebrations and festivities is leaving a vacuum behind. We’re rapidly becoming a nation deprived of sophisticated socialization, vibrancy, and laughter. Such events should be supported and promoted by all to revive the sparkle at Lahore.