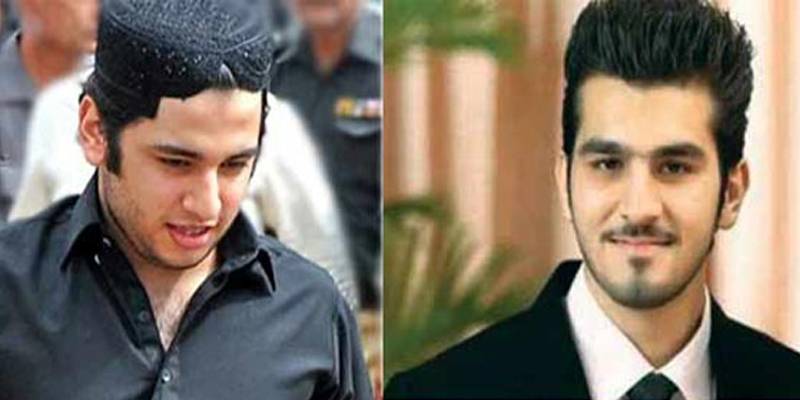 KARACHI - The Supreme Court of Pakistan issued orders to put the names of suspects in Shahzeb Khan murder case on the Exit Control List on Saturday as it admitted the appeal of civil society activists.

During the hearing of the appeal at the Supreme Court’s Karachi Registry, a three-member bench led by Chief Justice Saqib Nisar directed the government and interior ministry to place the names of suspects Shahrukh Jatoi, Siraj Talpur, Sajjad Talpur and Ghulam Murtaza Lashari on the ECL, effectively barring them from fleeing the country.

The petition was filed against the Sindh High Court's (SHC) retrial order and the top court also issued bailable arrest warrants for the suspects besides issuing notices to all the respondents in the case.

Members of civil society had approached the Supreme Court against the SHC ruling which set aside the death penalty for Shahrukh Jatoi and others convicted for the 2012 murder of Shahzeb.

The provincial court had ordered their retrial by a sessions court following which Shahrukh was granted bail.

The civil society members had pleaded in their petition that they had the legal standing to file the appeal as they were citizens of Karachi and reside in the same locality where the murder took place.

“The incident struck terror and created fear and panic among residents of the area” they stated in the petition, which, according to them, was filed as a public interest appeal on behalf of the people of Karachi, especially the people of Clifton and Defence, as well as the people of Pakistan, arguing that they were left in a state of shock and terror when the November 28 judgment was passed by the SHC.

The petitioner also accused the Sindh prosecutor general, the highest criminal law officer of flatly conceding to the setting aside of the June 7, 2013 ATC judgment arguing  “it is a sheer proof of the collusion between the murderers and public officers, especially in view of the past history” of this case.

It further stated that the SHC division bench’s order deviated from an earlier and binding judgment of May 15, 2013, which was issued by another divisional bench of SHC in the same case.

The petition argued that there were at least two eyewitnesses to the murder, meaning that overwhelming evidence against the murderers was available.

Shahrukh Jatoi and three other accused in the Shahzeb Khan murder case were freed on bail in December after Aurangzeb Khan, the victim’s father, filed an affidavit in support of the convicts’ bail application in the court.

Shahzeb, the only son of a police officer was gunned down by Shahrukh Jatoi in a posh locality of Karachi on December 25, 2012.

An ATC in 2013 had awarded death sentences to Jatoi and Siraj Talpur for the murder of Shahzeb, while life sentences were awarded to Sajjad Ali Talpur and Ghulam Murtaza Lashari.