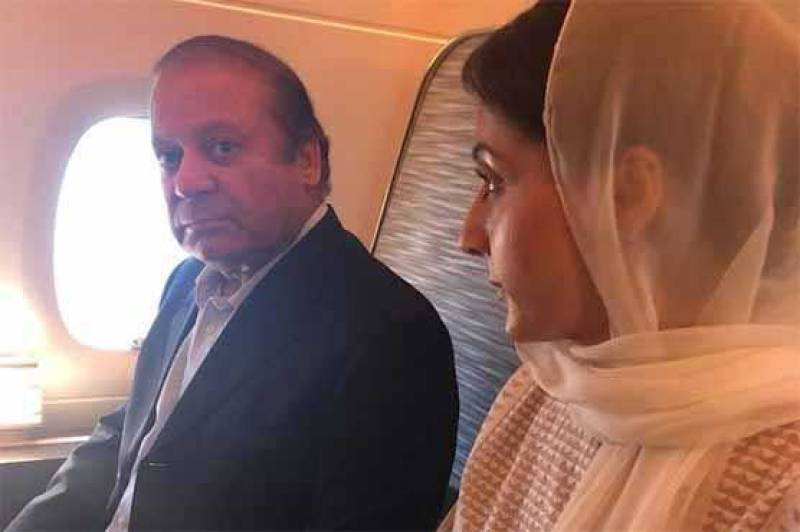 LAHORE - Ousted prime minister Nawaz Sharif and his daughter Maryam Nawaz, who were arrested after they arrived in Pakistan to face jail over “family corruption”, have been shifted to jails.

A 16-member team of National Accountability Bureau (NAB), awaiting the father-daughter duo at Allama Iqbal International Airport, took them into custody after immigration process as they arrived in the country a week after their conviction in the Avenfield reference pertaining to their luxury apartments in London.

They were then boarded onto a small private plane bound for Islamabad International Airport (IIA). The flight has left Lahore. Upon landing at IIA, Nawaz will be shifted to Adiala Jail while Maryam will be taken to Sihala rest house after having a medical checkup at Adiala jail.

Sihala rest house has been made sub-jail for the former first lady, Maryam Nawaz and notification in this regard has been issued. 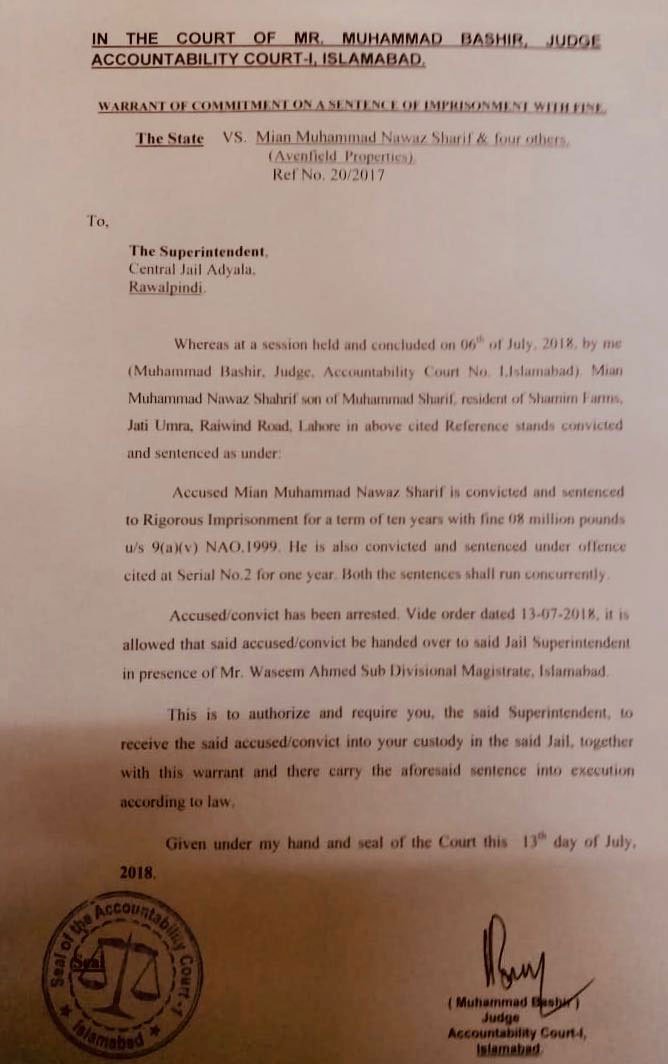 The flight from Abu Dhabi to Lahore took off around 5pm local time and landed in Pakistan at around 8:45pm PST. They had left London a day earlier.

According to media reports, dozens of security officials entered the plane after it landed and asked other passengers to leave.

Soon after their flight touched down at Lahore airport, an FIA team took the passports from the former premier and his daughter.

Last week, an accountability court sentenced Sharif to 11 and his daughter to eight years in jail for Panama Papers-linked corruption charges. Sharif says the cases against him are "politically motivated" — a scheme by the military and the judiciary to keep him out of politics and pave the way for cricketer-turned-politician Imran Khan to become prime minister after the July 25 general elections. The army, the judges, and Khan deny these claims.

What we know so far

Since the 68-year-old announced his return to Pakistan last week, hundreds of PML-N activists and officials have been arrested by the Punjab province's caretaker government.

A clash has taken place between PML-N workers and police at Ravi toll plaza. Police said three personnel, including an assistant sub-inspector and two constables, were injured in the clash.

The convoy of former federal minister Khawaja Asif which was headed from Sialkot to Lahore has been stopped near Kamoke. A large contingent of police and Rangers has been deployed at GT Road.

Streets leading to the Lahore airport have been barricaded by police to impede the former premier's supporters from receiving their leader. Authorities also blocked mobile phone and internet services ahead of Sharif's return.

The National Accountability Bureau (NAB) has disclosed that it has arranged two helicopters, expected to shift the father-daughter duo to Adiala jail in Rawalpindi as soon as they land. NAB has also deployed two teams each at Lahore and Islamabad airports for this purpose.

NAB letter to aviation division to get access to all the airports of Pakistan to arrest Nawaz Sharif & Maryam Nawaz pic.twitter.com/slPsdmRJYn

NAB Chairman Justice (r) Javed Iqbal has warned that strict action will be taken against anyone who obstructs the Sharifs' arrest. The PML-N, however, has claimed that it will only take out a peaceful rally at the airport to welcome its leader. 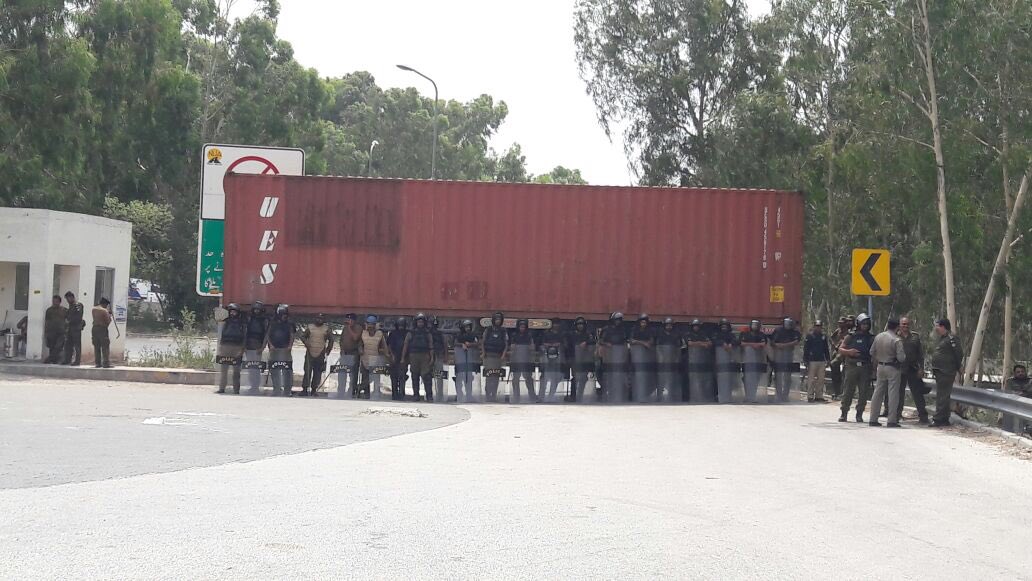 'Stand by me to change the fate of Pakistan'

While waiting at the Abu Dhabi airport for his flight home, Nawaz spoke to reporters from various news organisations over the phone.

The elder Sharif, who was in London with his ailing wife and children when the verdict was announced, said he is returning to Pakistan from London to fulfil his pledge to "honour the vote".

"What is happening in this country today, what is happening in Lahore, raises questions regarding the elections. No other province is facing the situation we see in Lahore: hundreds of our party workers have been arrested; people are being pressured into switching loyalties. All of this forms a question mark on the credibility of the election," Nawaz Sharif said.

"I am not afraid of being arrested. If I was, why would I be coming back? It does not matter if NAB or the people who have sent NAB personnel arrest me from here [Abu Dhabi] or from Lahore. I am ready for it," Nawaz said.

Earlier, in a video message, tweeted by Maryam, the former premier had urged his followers to stand with him when he arrives and "change the fate of the country".

"The country is at a critical juncture right now," Nawaz said in the recording. "I have done what I could. I am aware that I have been sentenced to 10 years [in prison] and I will be taken to a jail cell straight away — but I want the Pakistani nation to know that I am doing this for you."

Mayam had taken to Twitter to post pictures of scenes in London ahead of the father-daughter duo's departure.

Told my kids to be brave in the face of oppression. But kids will still be kids. Goodbyes are hard, even for the grownups. pic.twitter.com/ge17Al5gfY

In one picture, the father and daughter were seen bidding farewell to Kulsoom Nawaz, who is said to be comatose and admitted at a London hospital. 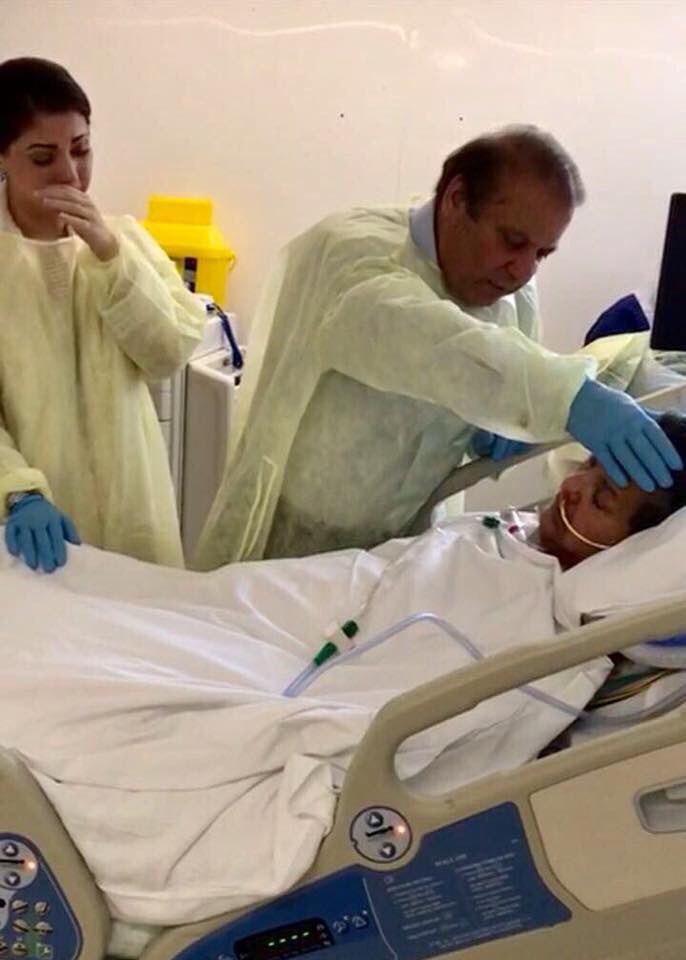 Former Punjab chief minister and PML-N president Shehbaz Sharif and his son Hamza Sharif are supposed to lead the main rally from Lohari Gate to the airport to accord a warm welcome to Nawaz Sharif. Several prominent PML-N leaders including former prime minister Shahid Khaqan Abbasi and party workers are part of the rally. 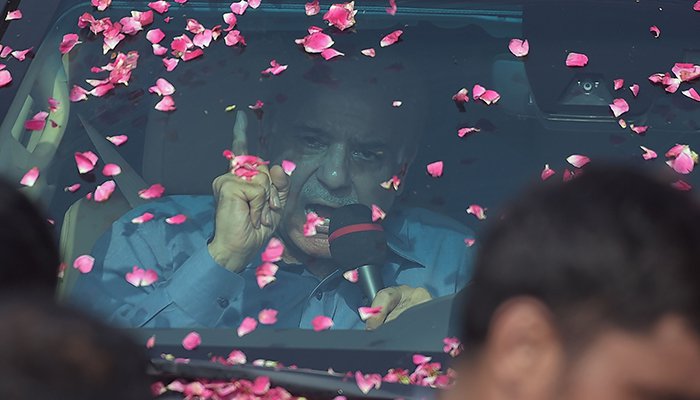 The caretaker government devised an alternate traffic plan on the eve of the arrival of Nawaz Sharif at Lahore airport on Friday.

The international travellers have been asked to reach at least six hours prior to the departure time at designated areas in Lahore. They will be transported to airport via a shuttle service which will be provided from Bhatta Chowk, Chungi Dogaij, Gajjumata, Mehfooz Park and Niazi Shaheed Park.