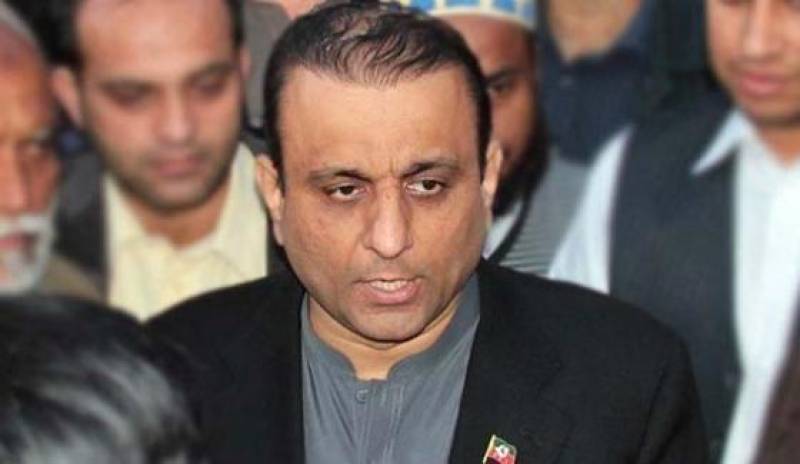 GUJRAT – PTI leader Abdul Aleem Khan was hit by a shoe hurled from the audience at a public rally in Gujrat, inviting a storm on social media.

Just as the party chairman, Imran Khan, turned to left while addressing the crowd atop a vehicle in the evening, a shoe came flying and hit Aleem, who was standing beside him, squarely in the chest. The PTI leader brushed off his chest and continued to smile.

Imran, who appeared to have not noticed that the incident happened, remained safe..

The man who threw the show was arrested by the security staff. Media reports suggest he was "upset at Imran Khan supporting Zardari".

While Imran Khan's party blame the ruling Pakistan Muslim League-Nawaz (PML-N) for the "shameful act", Punjab Law Minister Rana Sanaullah was quick to condemn the incident, saying that such shameful stunts can never be encouraged.

Such incidents are condemnable. We need to have tolerance and respect in politics. In 90s when we were at peak of polarisation between PMLN & PPP neither such incidents occur nor anyone hurled abuses in public places at leaders. IK injected hatred in politics beyond limits. https://t.co/Mj1lq31Ev6

The incident also invited a mixed storm on social media:

While condemning the act of shoe-throwing on Aleem Khan, clearly intended for Imran Khan, all I see is an awful tit-for-tat from the PMLN side w/o a moment of consideration for the shoe-hurler who must have faced the rage of an IK-devoted crowd.

Strongly and highly condemn the shoe throwing in Pti jalsa on Aleem khan while the traget was IK .. shameful

someone threw shoe at imran khan but hit aleem khan ,and the one who threw the shoe was pti worker he is upset cuz khan supporting zardari ... i mean c'mon don't call ur self khan supporter .. stupid ..

The incident comes two days after former prime minister Nawaz Sharif was hit by a shoe at a seminary in Lahore during his address. Following the incident, the attacker was detained by the seminary's administration and later handed over to the police.

The attack on the ousted PM had drawn widespread condemnation from all mainstream political and religious parties.

I strongly condemn the shameful act of hurling shoe on Nawaz Sharif, this sort of action will only bring forth political instability and unrest in the society.

Social and political intolerance must be discourged at every platform.

A day prior to that, a man threw black ink on the face of Foreign Minister Khawaja Asif during a PML-N workers convention in Sialkot on Saturday night.

Asif was addressing the convention when the man standing near the stage threw the ink from a bottle while raising the slogan of “Labbaik Ya Rasool Allah”.

SIALKOT - The hostility among political rivals took an ugly turn on Saturday when a man tossed black paint on ...

The minister’s face was smeared with black ink but he continued his speech and left the stage only after completing it. A man was arrested after the incident; however, Asif said he should be released saying he has no enmity with him.

Last month, a man hurled a shoe at Interior Minister Ahsan Iqbal while he was addressing a workers' convention in Narowal.