British media rakes up Narendra Modi’s past as Gujarat CM 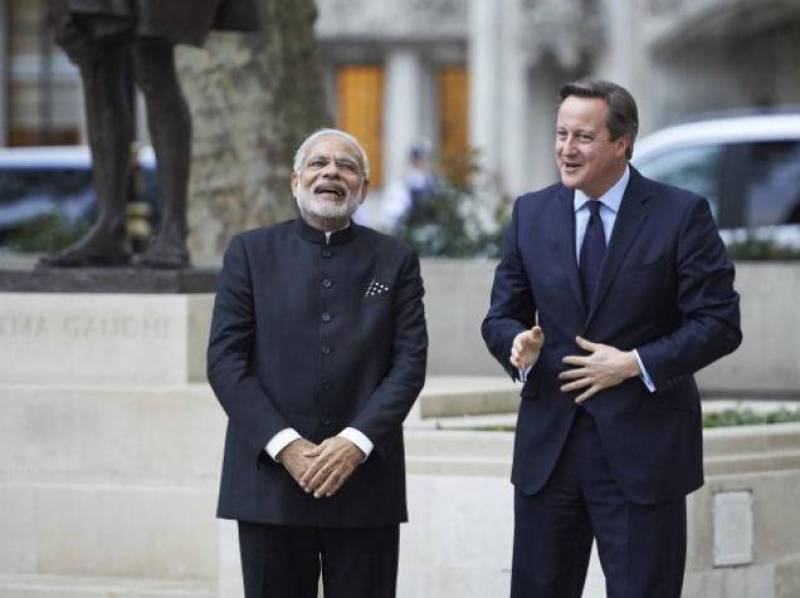 LONDON (Web Desk) - Despite the day before filled with bilateral agreements, business meetings, and a speech in the U.K. Parliament, Prime Minister Narendra Modi would have woken up to a barrage of critical reports in British newspapers on Friday.

Practically every newspaper, from the The Guardian to The Times, Daily Mail, Daily Telegraph and The Independent played the bilateral talks as secondary to concerns over Mr. Modi’s past when he was ‘persona non grata’ for the U.K.

“Pomp and ceremony for an ex-pariah” ran the harsh headline in the Daily Telegraph, which also carried a front-page photograph with the header “All is forgiven, Mr. Modi”, while The Times story began, “Britain will continue to pursue stronger ties with India despite Narendra Modi’s record on human rights, David Cameron insisted.” The Guardian ran the headline, “High security and Cameron’s praise for persona non grata Modi.”

After the 2002 riots in Gujarat, as then Chief Minister, Mr. Modi was never banned from visiting the U.K. and had even visited London in 2003, as he clarified himself on Thursday, The Hindu reported.

However, the U.K. did pursue a policy of ‘non-engagement’ with him until 2012, demanding action against the guilty after three British tourists were killed during the riots. In 2005, Mr. Modi had cancelled a visit to London after then Prime Minister Manmohan Singh had called him over British government’s concerns for his security.

Answering two hostile questions from the British media after his meeting with Mr. Cameron, Mr. Modi said “The U.K. has never stopped me from coming. Perhaps I couldn’t come because of my own time constraints.”

However, The Independent, that repeated the ‘persona non grata’ comment despite the Mr. Modi’s clarification, called the move to re-engage with Mr. Modi, “diplomatically the right move”. In an editorial, it wrote that “Britain must raise the issue of human rights”, but added the rider that “Whatever Britain does it must do so with candour and sincerity.

India does not wish to be lectured or patronised; it wants to be treated with respect. However, The Independent also ran a cartoon, that would be considered shocking (even libellous) in India that showed Mr. Modi speaking to Mr. Cameron about ‘blood on my hands’, with the statue of Mahatma Gandhi looking on.

When asked by The Hindu if all the criticism was unprecedented, commentators said it wasn’t unusual, as British newspapers are known for their rough treatment of their own leadership. “We are a democratic society, and while I disagree with the criticism and the protestors, I can only say they have a right to say what they feel.

However, the welcome he gets at Wembley on Friday should answer any critics,” said local leader Mayuri Parmar, who is a member of the Conservative Party, as well as an organiser of the event.

Mr. Modi will address the crowd of 60,000 people, the biggest such welcome for any leader in London, after lunch with Queen Elizabeth II.