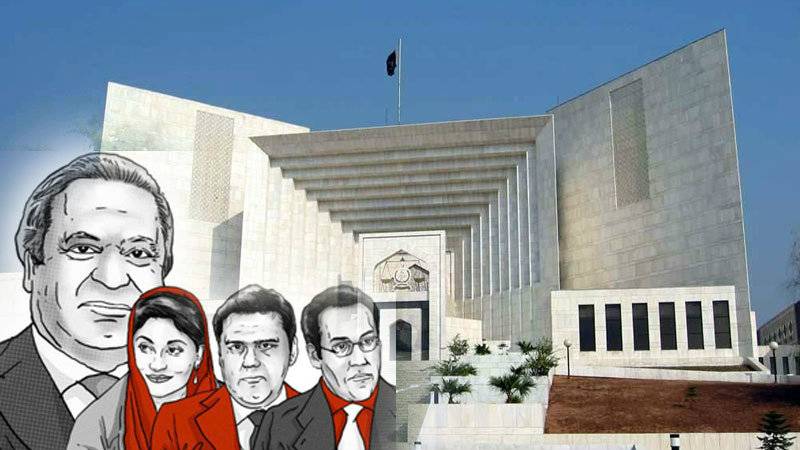 The bench was formed by Chief Justice Saqib Nisar after a three-member bench admitted a plea of Sharifs in this regard.

He submitted that that two judges, who had announced the decision on April 20, could not be part of the implementing bench, which disqualified Nawaz Sharif on July 28, as they earlier had signed a different judgement. He added that the April 20 verdict had not been included in the final verdict.

Haris said that three appeals have been filed against the verdict of the five-member bench and three against the three-member bench by Nawaz Sharif, Hussain Nawaz, Hassan Nawaz, Maryam Nawaz and Captain Safdar.

In response, Justice Ijazul Ahsan said that the April 20 judgement in which two judges declared Nawaz disqualified and three others voted for further investigation has not been challenged, adding, "It means you have accepted their verdict".

Haris replied that the judgement was given by minority; therefore, it was not challenged.

Justice Azmat Saeed remarked that the five-member bench was to judge the disqualification case under the April 20 verdict.

Justice Asif Saeed Khosa said that the judges who declared Nawaz disqualified did not raise an objection on July 28 verdict, adding that contention of every judge might be different but decision to declare Nawaz disqualified is the same.

Nawaz Sharif was declared disqualified on Capital FZE, he said, adding that it is necessary to give the right to defence before disqualification.

He said that the former premier was not given a fair trail in the case  as neither show-cause notice was issued nor was he given a chance to clarify his position.

Haris said that the judgement was signed by those who never heard arguments about FZE Capital, while Justice Azmat remarked that all the judges disqualified the former prime minister on different grounds.

The counsel asked whether Nawaz had been disqualified for life under 62 (1) F. To this, Justice Ejaz said: "We need your assistance on it".

He contended that appointment of a supervisory judge for NAB reference will affect the basic rights of Nawaz Sharif. "How can a transparent trial be conducted under the supervisory judge?" he asked.

Justice Ejaz Afzal remarked that a trial court will be free to decide the case, adding that the respondent will have a chance to cross-examine Panama JIT members and witnesses.

A five-member larger bench had disqualified Nawaz Sharif from holding the office of Prime Minister and ordered the National Accountability Bureau (NAB) to initiate investigations against the former Prime Minister's sons, son-in law and his close aide Ishaq Dar.

The Sharif family had moved separate review petitions, challenging the decisions given by the SC bench and appointment of a three-member bench of the apex court.

Earlier on Tuesday, the apex court’s three-judge bench recommended the CJP constitute a larger bench to hear the petitions.

When the apex court’s three-judge bench headed by Justice Ejaz Afzal Khan and comprising Justice Azmat Saeed Sheikh and Justice Ijazul Ahsan took up the review petitions filed by the deposed Prime Minister Nawaz Sharif and his children, their counsels Salman Akram Raja and Khawaja Haris submitted that the five-judge larger bench was competent to hear the petitions.

Accepting their request the bench recommended that the CJP form a larger bench to hear the ruling family’s review petitions on Wednesday.

On April 20, Supreme Court’s Justice Asif Saeed Khosa had announced the Panama Leaks case decision comprising 540 pages, saying that the court issued a split ruling calling for a JIT. Two of the five judges went on to brand Sharif “dishonest” and saying he should be disqualified. However, the 3-2 split decision provided Sharif family a chance to prove their innocence and clear their names from Panama leaks.

“It is hereby declared that having failed to disclose his un-withdrawn receivables constituting assets from Capital FZE Jebel Ali, UAE in his nomination papers filed for the General Elections held in 2013 in terms of Section 12(2)(f) of the Representation of the People Act, 1976 (ROPA), and having furnished a false declaration under solemn affirmation respondent No. 1 Mian Muhammad Nawaz Sharif is not honest in terms of Section 99(f) of ROPA and Article 62(1)(f) of the Constitution of the Islamic Republic of Pakistan, 1973 and therefore he is disqualified to be a Member of the Majlis-e-Shoora (Parliament).”