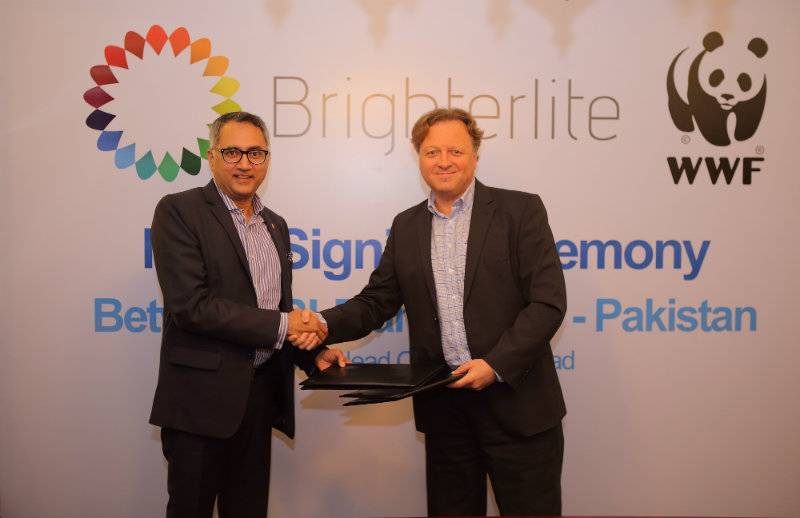 BrighterLite Pakistan (BLP) is pioneer of this technology which has a key focus on healthy environment and affordable electricity. The memorandum was signed by Hammad Naqi Khan, Director General, WWF-Pakistan, and Stein Eitrheim, CEO Brighterlite Group. 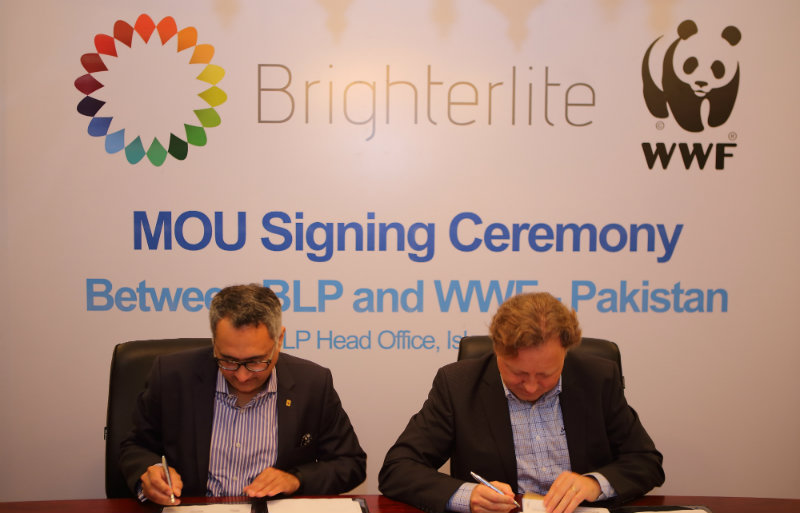 The MoU reaffirms WWF-Pakistan’s commitment to develop and support policies on alternative energy sources which will help in reducing the threat of climate change and making air safer to breathe. It commits that WWF-Pakistan will provide solar home systems to off-grid populations at large as well as support the capacity building of human resource in order to see through the five-year long project.

BLP will facilitate WWF-Pakistan’s established communities with the provision of solar home systems according to the Pay-As-You-Go mechanism.

The WWF-Pakistan and BLP will facilitate cooperative initiatives to promote the use of renewable energy sources. In the first phase of the project in collaboration with K-Electric, basic electrification will be provided to 1,745 households with the objective to scale up to 10,000 households in Karachi and its suburbs.

It is intended that WWF-Pakistan and BLP by joint initiatives will provide distributed electricity by means of solar home systems to more than 100,000 households during the next five years. WWF Pakistan and Brighterlite Pakistan have successfully tested some of the products in Sindh, especially Districts Thatta and Sanghar and hope to scale up the outreach in the coming months.

Hammad Naqi Khan welcomed the opportunity to conclude an MoU with BLP and acknowledged the contribution of BLP in working with local partners to help expand renewable power. “If the products could include small water purification unit it would help thousands of poor communities across Pakistan meet their most critical needs,” he said.

Stein Eitrheim said he was looking forward to both organisations working in a collaborative and optimistic way to effectively address the energy needs and concerns of the country. “Solar energy will get more advanced and accessible for the people of Pakistan in the coming years,” he said.

“So far more than 11,500 people had benefited from BLP products and the priority is to target off-grid communities,” he added. 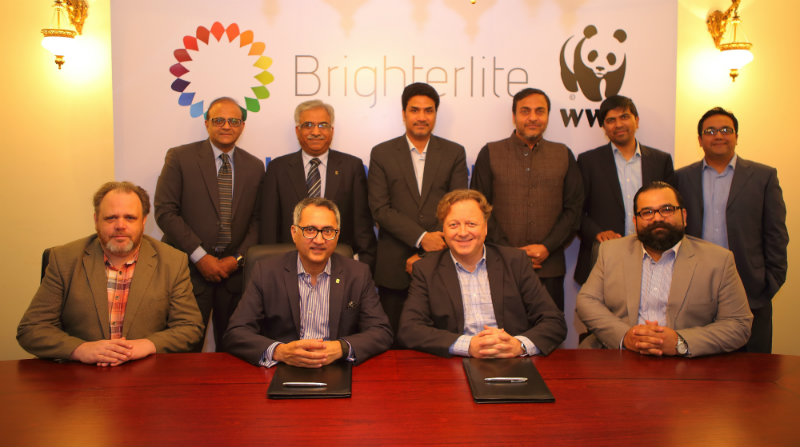 On the occasion, IbrarKhattak from International Financing Cooperation (IFC) lauded the partnership and hoped that it will bring a positive change in the off-grid areas of Pakistan. He said that IFC is actively pursuing quality assurance of solar companies in Pakistan through the Lighting Pakistan project, and that partnerships like these are vital to ensure that companies work with organisations that have the capacity to mobilise communities at the grassroots level in favour of such technologies.

The principal source of electricity generation in Pakistan is currently oil, which accounts for 35.2% of the total generation, hydel (29.9%), natural gas (29%) and nuclear and imported (5.8%). The country has witnessed some of the worst energy crises in the past few years with a yawning gap of 5,000 MW between the supply and demand of electricity. The International Energy Agency forecasts that the total electricity demand of the country will increase to 49,078 MW by 2025.

Pakistan has to start exploring options of alternate energy sources such as solar and wind to meet its current and future energy demands. According to a 2008 national greenhouse gas inventory 50% of Pakistan’s CO2 pollution comes from power plants and from the transport sector burning fossil fuels.

There is therefore no path to protecting the climate without dramatically changing how electricity is used and produced. Although Pakistan’s global carbon emissions are very low compared to large emitters like China, Russia, India and the USA, globally but it is placed in the top ten countries that are highly vulnerable to climate change, with impacts such as floods, droughts, heat waves and glacial lake outburst floods increasing yearly.

Renewable energy minimizes carbon pollution and has a much lower impact on the environment. Globally it is having its moment in the sun following the Paris Agreement where 195 countries agreed to shift to a low greenhouse gas emissions development path, among others.