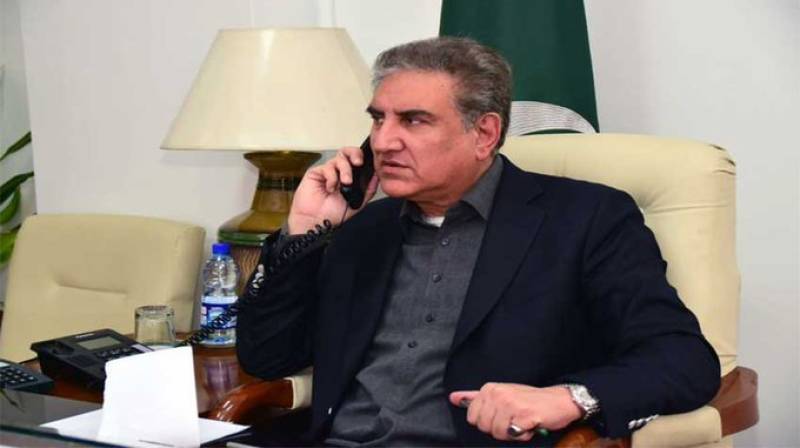 ISLAMABAD - Following up on their earlier conversation regarding the COVID-19 pandemic and efforts to contain the outbreak, Foreign Minister Makhdoom Shah Mahmood Qureshi Tuesday held a telephonic conversation with British Secretary of State for Foreign and Commonwealth Affairs, Dominic Raab.

He felicitated the secretary of state on the discharge of Prime Minister Boris Johnson from the hospital and wished him a speedy recovery.

The foreign minister commended the able stewardship of the fight against the outbreak by the secretary of state in the absence of the prime minister, a foreign affairs ministry press release said.

Underscoring Pakistan’s solidarity and longstanding affiliation with United Kingdom (UK) and its people, he offered heartfelt condolences over the loss of precious lives.

He also lauded the role being played by the NHS and healthcare professionals the world over in risking their lives in looking after the patients.

The two ministers discussed matters relating to the repatriation of citizens in the wake of the closure of airspace due to the pandemic emergency.

The foreign minister informed his British counterpart that so far PIA had operated 23 flights repatriating more than 7,700 British nationals.

The British foreign secretary appreciated and thanked Pakistan for its support and further informed that the UK wanted to operate chartered flights to repatriate remaining British nationals from Pakistan.

The foreign minister conveyed that Pakistan was open to the idea and would facilitate the UK in that regard.

He apprised the secretary of state about Prime Minister Imran Khan’s call for launching a ‘Global Initiative for Debt Relief.’

Alluding to reports by the World Bank and International Monetary Fund (IMF) concerning an imminent economic recession of a graver nature than the great depression, the foreign minister underscored that without immediate, coordinated and comprehensive actions to create fiscal space, the developing world may have to contend with dire social, political and economic consequences.

He expressed the hope that the UK would support and advance this cause in earnest, particularly through the platform of G20.

The British foreign secretary assured of UK’s understanding and support for the initiative.