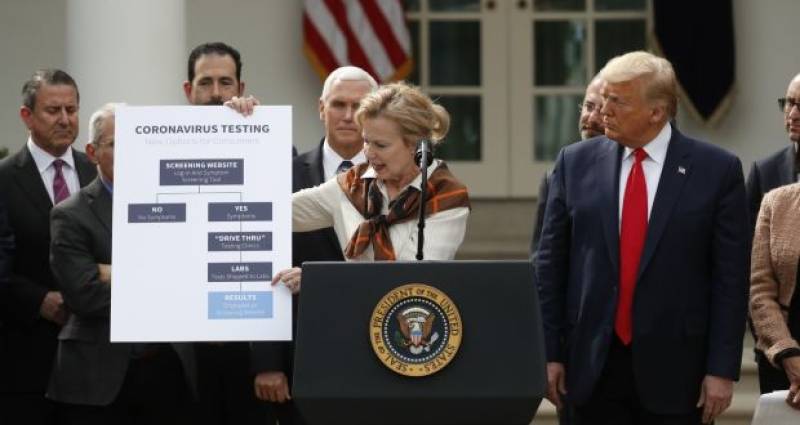 NEW YORK – US President Donald Trump on Friday declared a national emergency over the coronavirus, freeing up additional resources and funding as federal, state and local governments attempt to combat the rapidly spreading disease.

The move allows the Federal Emergency Management Agency (FEMA) to tap into billions of dollars and mobilize personnel more quickly to help state and local agencies and leaders respond.

“I am officially declaring a national emergency — two very big words,” Trump said in remarks broadcast live from Washington, adding that the move would release up to $50 billion in federal aid.

"The spirit and the will of our nation is unbreakable. We will defeat this threat. When America is tested, America rises to the occasion." pic.twitter.com/67rS4XBE5J

The coronavirus pandemic has spurred panicked shoppers to stock up on products ranging from cleansing wipes to peanut butter as they prepare to hunker down in the midst of the growing disease.

President Trump appeared on stage at a White House lawn with members of his coronavirus task force and business executives after meeting them inside the White House over how to accelerate testing of Americans for the virus to better track the contagion’s spread.

Shaking hands freely with the gathered business executives, the 73-year-old Trump later acknowledged he expected to be tested for the virus. He had come into contact with a Brazilian official last Saturday who later tested positive for coronavirus.

“Most likely, yeah, most likely. Not for that reason but because I think I will do it anyway,” Trump said. “Fairly soon. We’re working out a schedule.”

“We have no symptoms whatsoever,” he said to a question about whether he should get a test.

As part of the government response, Trump said he would waive interest on federal student loans “until further notice,” and that the Department of Energy would buy up crude oil for storage in US reserves.

The president urged states to set up emergency operation centers and hospitals to active emergency preparedness plans, as well as a partnership with private companies to increase testing capabilities. He also said that the administration was working to set up drive-thru test sites.

The administration has faced intense criticism over the slow rollout and availability of tests.

“The goal is for individuals to be able to drive up and be swabbed without having to leave your car,” Trump said. The president met earlier in the day with lab and pharmacy executives to discuss the initiative.

He said he would give Health and Human Services Secretary Alex Azar “broad new authority” allowing him to waive various laws and regulations related to hospital operations.

Trump was flanked by Azar, Vice President Pence, and Dr. Deborah Birx, the State Department health expert who is helping to coordinate the federal response.

“Our overriding goal is to stop the spread of the virus,” Trump said. “This will pass … and we’ll be even stronger for it.”

The president’s appearance, which lasted for more than an hour, marked the second time this week Trump has tried to reassure the nation that administration is prepared to respond to the coronavirus pandemic.

Trump took questions from reporters on Friday, rejecting blame for any missteps on testing and downplaying his interactions with officials who have gone into self-quarantine after coming into contact with others who have tested positive for coronavirus.

“I don’t take responsibility at all,” he said when asked about U.S. delays to testing the public. He later told a reporter she had asked a “nasty” question when pressed about the hollowing out of executive branch agencies focused on global health issues.

The news conference featured a parade of private-sector executives involved in efforts to ramp up testing and government officials who have been involved in the day-to-day coronavirus response.

Trump shook hands with a few of the business leaders as they stepped up to speak, despite CDC guidance to avoid hand-shaking. The president also bumped elbows with an executive from the LHC Group.

The stock market appeared to respond favorably to Trump’s remarks, with the Dow Jones Industrial Average closing up nearly 2,000 points on the day after substantial loses earlier in the week.

Trump had indicated Thursday that he was considering declaring an emergency over the virus as cases quickly mounted in the U.S.

Presidents have typically invoked the Stafford Act to respond to major natural disasters, but former President Clinton used the measure to respond to an outbreak of the West Nile virus in 2000.

By making the emergency declaration, Trump will allow FEMA to tap into more than US $ 40 billion from the Disaster Relief Fund to help states combat the virus, which has sickened more than 1,800 people across the country.

Democrats had urged Trump to declare a national emergency in recent days.

During his Wednesday Oval Office address, Trump announced a 30-day restriction on travel from most of Europe as well as economic steps to help individuals and businesses impacted financially by the virus’s spread.

But public health experts and Democrats have urged him to do more after he failed to address testing shortages, hospital capacity and other domestic measures that could help stem the spread of the disease.

As Trump spoke, House Democrats were prepared to move forward with a vote on legislation to expand testing and financial assistance to workers and businesses hit hardest by the virus.

Trump has largely stayed on the sidelines of those negotiations, allowing Treasury Secretary Steven Mnuchin to serve as the White House’s point person.

The president, however, threw cold water on the House Democrats’ bill, telling reporters in the Rose Garden that party leaders “didn’t agree to certain things.”

“We could have something,” he added. “They’re not doing what’s right for the country.”

State and local leaders have largely taken measures into their own hands, banning large public gatherings and canceling schools for weeks at a time to try and blunt the spread of the virus. Most major sports leagues have also suspended games indefinitely due to the virus, and movie releases and concert tours are also being pushed back or called off.

Trump’s speech also came just before the markets close on Friday. Financial markets have plummeted this week amid uncertainty over the spread of the disease and fears over its effect on global trade. Wall Street on Thursday suffered its worst day since the 1987 stock market crash.

The World Health Organization officially declared the coronavirus a pandemic on Wednesday. More than 135,000 cases have been reported globally, as well as more than 5,000 deaths.