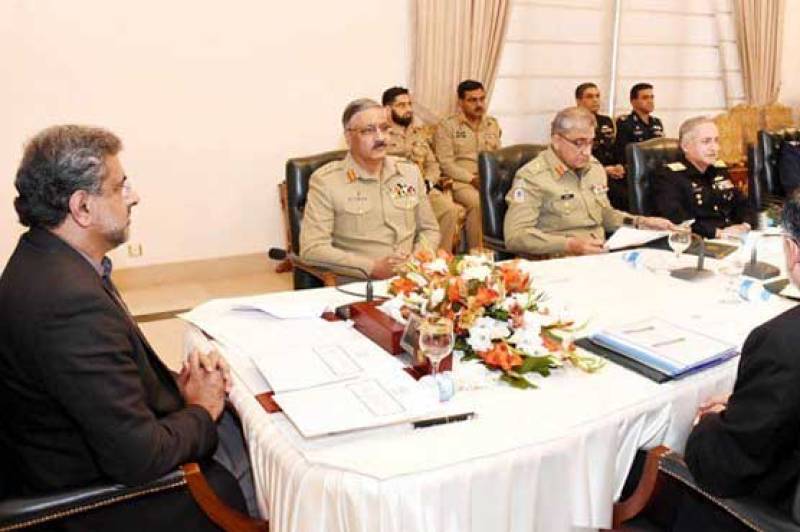 ISLAMABAD - Nawaz Sharif may land into troubles over the attack on the state of Pakistan, as a high-level meeting of country's civil and military leadership is underway today to contemplate on situation evolving after Nawaz Sharif’s diatribe.

The meeting was called after Pakistan's military approached PM Abbasi on Sunday for a moot to discuss misleading media statement on the Mumbai incident.

Nawaz, in a recent interview to Dawn newspaper, had said, “militant organisations are active. Call them non-state actors, should we allow them to cross the border and kill 150 people in Mumbai? Explain it to me. Why can’t we complete the trial?”

His remarks were played up by the Indian media as an admission of Pakistan's involvement in the terrorist attacks, even though similar questions and statements have been raised from civilian and security officials in Pakistan earlier.

Sources privy to development revealed that matter was being treated as a premeditated step against the State of Pakistan. Inside-aware further revealed that Pakistan Muslim League Nawaz (PML-N) supremo was acting as a puppet in the hands of hostile forces.

Sources further asserted that Sharif’s tirade was aimed at pressurizing state-institutions by denigrating them.

On the other hand, a German journalist, Elys Davidson in his book last year revealed that the Mumbai attack was masterminded by Israel and America and the facts were distorted by the Indian government. According to the book, many witnessed saw Ajmal Kasaab and others gathering in Nariman House two days before the incident, but the Indian investigative agencies never included their statements in the investigation report.

Nawaz’s remarks being twisted out of context: Shehbaz

Pakistan Muslim League-Nawaz President Shehbaz Sharif on Sunday said that Nawaz's interview was twisted out of context by his political opponents.

In his address at a public rally in Sindhri, the Punjab chief minister said that India is conspiring against Pakistan by using Afghan soil.

"Our mothers and sisters are being killed in Kashmir. Almighty has made Pakistan a nuclear state. If India casts an evil eye upon Pakistan then the army and people of Pakistan will give a befitting reply," he said.