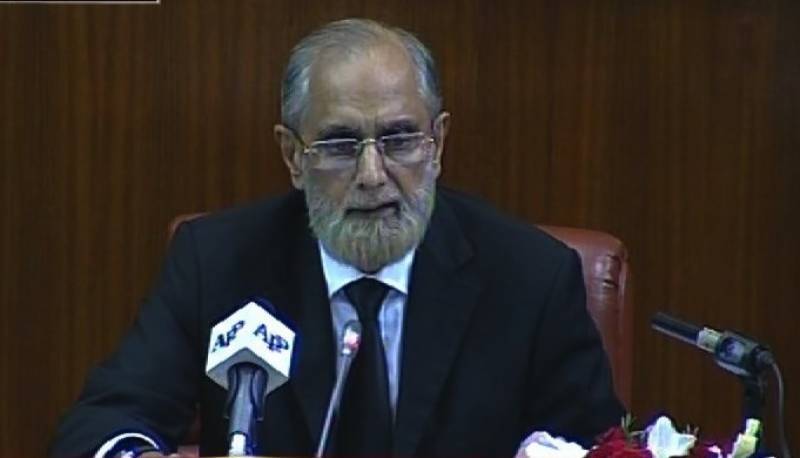 ISLAMABAD (Web Desk) - Chief Justice of Pakistan Anwar Zaheer Jamali on Friday termed the coverage of Thursday‘s proceeding ‘irresponsible‘ and clarified that he never said people should stand up against the government.

While hearing the case pertaining to the Punjab government’s Orange Line Metro Train project, the Chief Justice made it clear that no judge can give such irresponsible remarks in the courtroom.

Justice Anwar Zaheer Jamali went on to say that he only asked people to vote the right person as it is for the people who vote the rulers to power.

The court had directed the plaintiffs and all the respondents to suggest the names of three experts each who could advise the bench regarding technical matters in the Orange Line Mertro Train case.

The apex court is hearing the appeals of the Punjab government, Lahore Development Authority (LDA), the Punjab Mass Transit Authority and Nespak against the Lahore High Court’s verdict regarding ban on the construction work within 200 feet of 11 heritage Lahore.

Related: “People are being fooled in the name of democracy,” Chief Justice shows his anger for the PMLN govt

Major opposition parties threw weight behind the remarks of the Chief Justice and opined that the highest judicial office vindicated their stance.

Pakistan Tehree-e-Insaf in particular took the remarks as an endorsement for their upcoming capital lock down and urged people to stand against the corrupt system.

However, the CJ has cleared the air regarding his remarks adding that the media reporting was irresponsible.