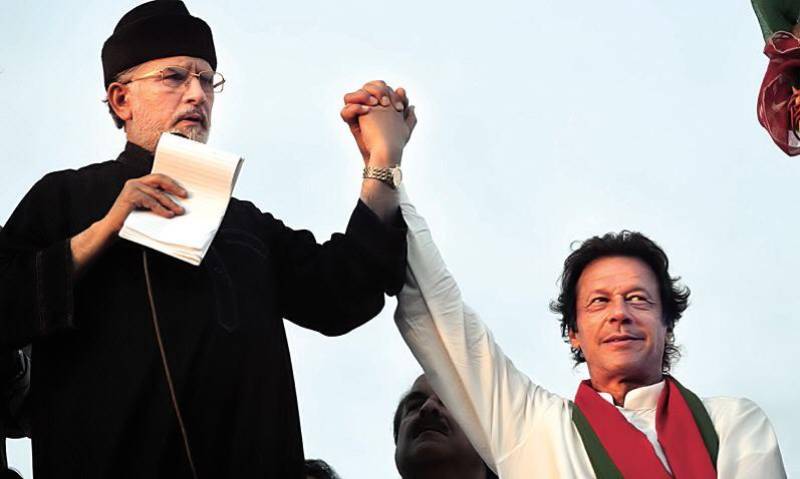 "On September 17, please decide if you are supporting the law or dacoits and country's looters," Dr Qadri said a joint press conference with PTI Chairman Imran Khan in Punjab's capital city.

Reacting to Pakistan Muslim League-Nawaz (PML-N) claims that the ousted PM, Nawaz Sharif, was disqualified due to iqama, Qadri said that “you (Nawaz) were disqualified for your dishonesty. You were disqualified because you concealed facts and forged official documents.”

Speaking about the upcoming NA-120 by-election, the PAT chief said that the nation has to make a decision if it wants to see a powerful judiciary or not. “Nawaz doesn’t even consider his voters as humans. The so-called development projects all revolve around his corruption,” he added.

Imran Khan, at the presser, remarked that Maryam Nawaz, daughter of ousted PM Nawaz Sharif, was behaving like a deputy prime minister in the run-up to the by-polls in the NA-120 constituency. “Maryam disrespects the judiciary on a daily basis,” he added.

Earlier in the day, Election Commission of Pakistan had issued bailable arrest warrants of Imran. Reacting to this, Imran remarked "[The] ECP does not have the authority to issue arrest warrants. Our case is being heard by Islamabad High Court."

He further remarked that ECP has never heard a contempt of court case before his. "The ECP is working on PML-N's behest."

NA-120 fell vacant after Nawaz Sharif was disqualified by the Supreme Court in the Panamagate case on July 28 on charges of concealing his salary from a Dubai-based company, which he claims he had never received.

PML-N has never lost an election in this constituency since 1985.