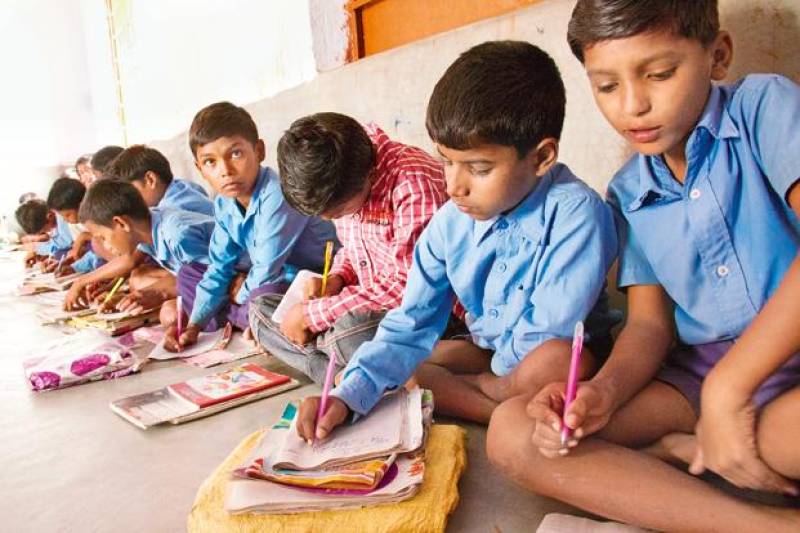 For a student to be successful in our education system, rote learning leading to an expression consisting of a word-by-word copy of provided notes is inevitable. Simultaneously, a successful teacher in most of the Pakistani schools and colleges is a supernatural being capable of performing herculean tasks. Local examination boards’ not only curb the creativity of learners but play a pivotal role in making teachers a mere robot. There are multiple issues residing permanently in our educational institutions which are fatal in nature. An even more gloomy side of our institutions is the practice providing limited chances to the teenagers of personal grooming and attaining high morals.

It all begins with the formation of sections when the entrants are categorized as high achievers, mediocre and dunces. The best rote learners are put in one section whereas mediocre students form a separate section. But the biggest tragedy is the school life of teachers and students who are ordained to be a part of the lowest performing pupils. These low performers get a place in Commerce group often.

Labeling the ability spoils the career of teachers as well as of learners for they are considered incapable of performing better as a result least attention, value and respect are given to them. Ultimately, these low performers become habitual of the peremptory behavior of the teachers. The practice of degrading and upbraiding is at the optimal level in these classes. Resultantly, weak students not only remain hopeless but also fail to realize the importance of self-respect, dignity and time.

Class control is the biggest issue faced by teachers in the lowest performers’ section where teachers constantly yell at students and sometimes beat them inhumanly. These youngsters are, in fact, get used to of such treatment and whenever a teacher treats them with love and care, they refuse to listen to him. Candidly, after being suppressed by the teachers for years, the sense of self-dignity departs and they understand only one language and that is intense humiliation. One of the major reasons behind this unacceptable behavior of teachers is the strength of the class. Often more than 50 students are made to sit in one class which leaves limited options for a teacher since he is responsible for getting all of them ate at least 33 percent marks in board examination.

Individual attention is impossible for if a teacher is able to only make these kids listen to him, it is a great achievement for the instructor. Teachers at the college level have less than eight months to teach the entire syllabus and it is an uphill task in alike classes.

Morality related discussion is considered a waste of time because a teacher is only required to impart the syllabus. Teachers also try to avoid working on moral issues, as they are more concerned about informing the administration about their progress in the syllabus.

A responsible citizen brings positivity in society and grades have no impact on the making of an invaluable member of the community, whereas a teacher does have a strong contribution in the making of an active citizen. Unfortunately, it is impossible for a teacher to even breathe serenely for as soon as he stops the rejected and neglected youth plunges into the realms beyond his/her access. These kids are not trained to listen carefully; they only require a split second to take control of the class.

Activity-based learning is unfathomable because neither is there appropriate space available nor students have experience of this kind of education. Similarly, teachers also recommend delivering lectures for they believe that once a learner is asked a question, the class won’t let them teach and waste time in talking.

Feedback, the most significant aspect of education, is undermined because overcrowded classes, race of course completion, limited time and lack of intent all overcome the day and ultimately a successful delivery of lectures satisfies both the teacher and the college. Days turn into weeks and weeks into months and at the end of the month of March, a teacher is successful if the syllabus is completed according to the weekly break up provided by the administration. Everyone knows that if a student is worried about the exams he hires a teacher for home tuition or joins any renowned academy.

Linguistic abilities like the rest of the characteristics aren’t improved, as teachers are only responsible for passing on the provided curriculum. Even English is taught in Urdu at Matric and FSc level in Pakistan. Definitions are crammed without any conceptual understanding. Even teachers have no time to explain something in a way that helps kids understand the idea. The reality is immensely bitter: FSc students define proper noun as a name of a ‘KHAAS’ person, place or thing, for instance, Quaid-e-Azam, Alama Muhammad Iqbal and Faisal Mosque. Ironically, these students don’t consider their names as proper nouns since they aren’t ‘KHAAS’, therefore their names are common nouns according to their knowledge.

When will we change? Our rotten education system is devastating for Pakistani youth. Why are we cheating ourselves by boasting about the results when all know that these grades are fake? Our youth studying the local boards' curriculum is way more in number than those learning the Cambridge curriculum. Innovation must prevail if our nation desires to progress and prosper.

Civil Service Reforms - An out of the box approach

Is the educational system of Pakistan widening the gap between social classes?