"New" men at Q-Block: It’s NOT just the Economy, Stupid 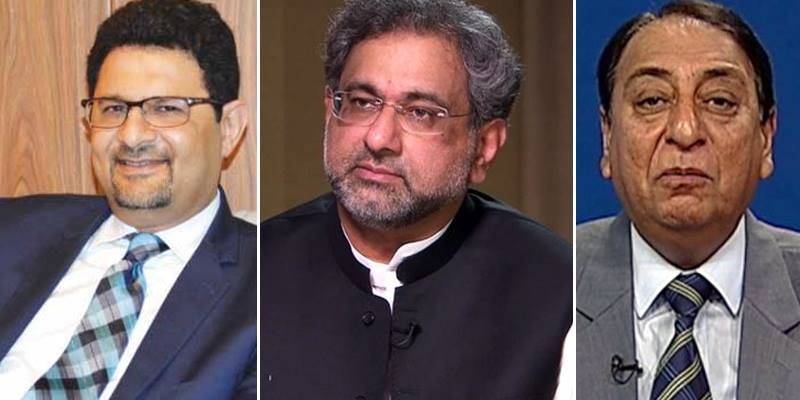 There is hardly anything new, and more importantly of substance, with the proclaimed ‘new’ finance team of prime minister Shahid Khaqan Abbasi.

Yet, it is quite possible that the ‘new’ guys may be able to ‘deliver’ for the rulers what the country’s most powerful finance minister in decades, Ishaq Dar, could not do during four and a half years.

It needs no stress that the basis for the most, if not all, of such decisions and moves at the top, in Pakistan, is not necessarily something known as merit.

Notified as the new face of Pakistan’s almost-always-in-crisis finance ministry in the last week of calendar year 2017, both the state minister and PM’s advisor on finance have been dealing with affairs of the ministry and related issues, in one way or the other, for quite some time.

Miftah Ismail, now the formal advisor to PM on finance, was practically doing the same job since early November when PM Abbasi had handed over to him the charge of finance after Ishaq Dar’s inability, rather denial,to return from London, avoiding the ongoing litigation against him in the accountability court.

Having been a member of the top economic team of former PM Nawaz Sharif, in the capacities ranging from head of Board of Investment (BoI), Privatization Commission, Sui Southern, and a director for PIA, Miftah is well aware of the heath of national economy. So does he know its ailments?

Let us also not forget that a doctorate in Public Finance and a stint with the International Monetary Fund (IMF) as a senior economist in early 1990s are not his only credentials, but close ties with Sharifs are the factor making the real difference. No surprises here, at all.

The good news though is that Dr. Ismail is known as an economic and business manager of calibre, and some of his party’s staunchest opponents have been heard giving him credit for his initiates at the BoI, specifically the auto policy that is now attracting sizeable investments in the sector.

Sworn in as state minister for finance, Rana Afzal – ruling party’s MNA from Faisalabad – too has been dealing with affairs of the finance division at Pakistan Secretariat’s Q Block, though in a relatively less visible and even less-involved position of Parliamentary Secretary.

But we have another flavor to add here. Rumour has it that his appointment was not seen as a good move by some in the ruling party, as Mr. Rana is seen as a person not in the good books of powerful institutions of the Pakistani establishment. But the same became his merit in this case, it seems, as Dar and Nawaz, who approved his name for the post last week, did want to give some political message through this appointment. Message delivered. PM Abbasi had to deliver it, willingly or unwillingly.

Miftah has started on a positive note, expressing openness by seeking advice from babus and welcomed, reportedly, by business barons. Yet, the challenges in front of this new-look, though not necessarily new, team are momentous and time is too limited to make a lasting or durable impact, save some miracles.

Newly appointed advisor’s focus on curtailing the deficit through enhancement of exports is noted with positive vibes, but at the same time we cannot forget that IMF was the place where he started gaining the exposure into affairs of national economy and public finance.

A re-embrace on the cards? Let us hope not, but his options too are quite limited. He is also spot on when he talks about broadening the tax horizon – though his intent for labelling the non-filers as criminals would not go down as well as he would have hoped, for reasons well-known across the nation – but this is not a task to be completed in a few months’ time.

Another important point to note is that he has mentioned to come up with an amnesty scheme for off-shore wealth of Pakistanis. The contours of this scheme would become important in today’s setting.

It would be very interesting for every observer of economy in Pakistan that whitening the wealth of which segment of society is the intent, the motive of the scheme to be launched. Abbasi’s best hope would be that his finance advisor does not end up inviting further ire of the political rivals, and let us not forget an ‘activated’ NAB.

Ishaq Dar has neither resigned nor is he out of the affairs of the all-important ministry, altogether. Not only the baggage of Dar’s policies and actions is quite heavy to carry, but his influence on the affairs of the ruling family, even from London, would be more of task than managing the economy for this two-member team of PM Abbasi.