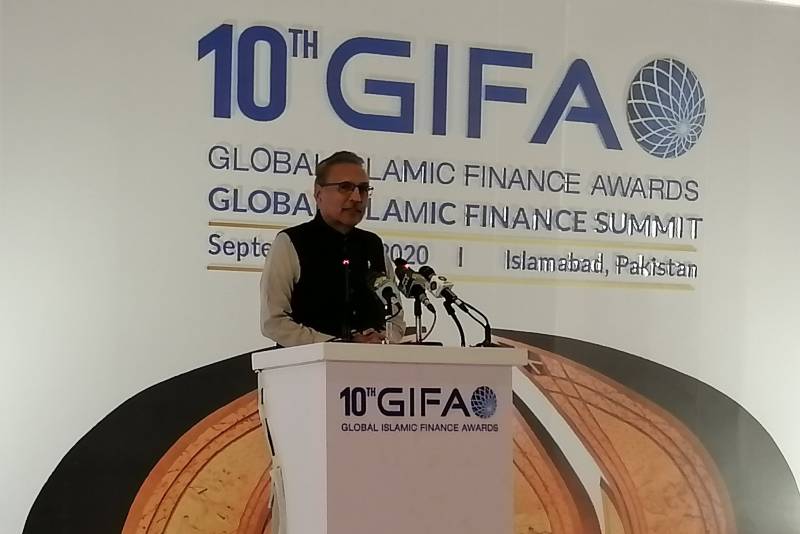 ISLAMABAD – Pakistan has earned the Global Islamic Leadership Award in recognition of its efforts for promotion of Islamic Financing, according to the state broadcaster.

The award was received by President Arif Alvi at the 10th Global Islamic Finance Awards Ceremony in Islamabad on Monday.

Speaking on the occasion, the President noted that Islamic Financing is increasing around the world but its full potential yet needs to be exploited.

The President appreciated the fact that seventeen percent of Pakistan's banking sector has tuned to the Shariah Compliant instruments. He pointed out that Sukuk bond was recently floated in the energy sector.

President Arif Alvi commended the role played by State Bank of Pakistan and Securities & Exchange Commission of Pakistan in promotion of Islamic banking.

My speech on spirit of Islamic lending, inclusiveness of women, of differently abled people & poor in the economy. Wealth inequality, exorbitant profit making, exploitation of the earth beyond its capacity, all are challenges we face. Does Islam & its morality provide a solution? https://t.co/lLmDww4cUa

He said Islam has nothing to do with exploitation and elitist culture; therefore, such approaches should be discouraged in Islamic financing.

The President also stressed the need for economic empowerment of women saying this is vital for development of the country. He said the women should be given their due share in inheritance.

In his remarks on the occasion, Governor State Bank of Pakistan Reza Baqir expressed the commitment to promote Islamic financing and take it to the levels never seen before.

He said there is a Shariah Advisory Committee comprising three schools of thought, Shariah boards and other mechanisms to ensure compliance with Shariah principles in the Islamic financing.

The Governor State Bank said that the Central Bank is also playing its role for creating awareness amongst the people about the Islamic financing.

State Bank of Pakistan was also given Best Central Bank of the Year award for promoting Islamic banking. Others who received the awards on the occasion for their contribution to Islamic financing included renowned scholar Muhammad Taqi Usmani.