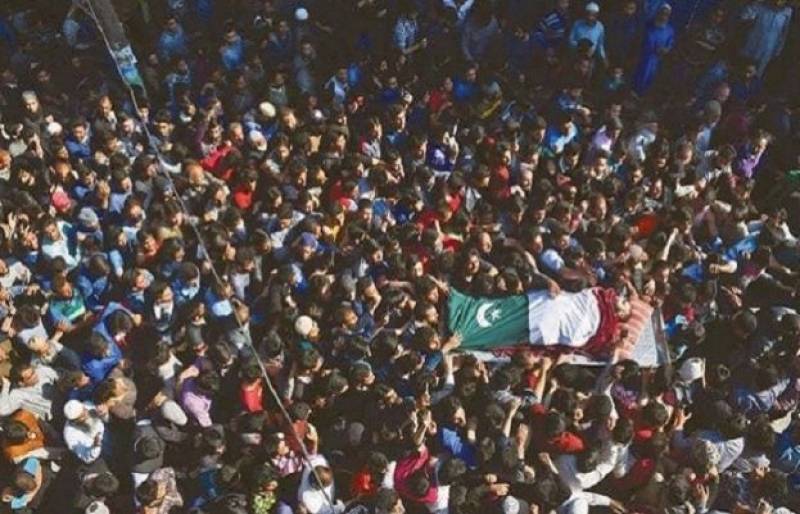 SRINAGAR – Eleven Kashmiris were martyred and over 200 injured in fresh acts of state-sponsored terrorism by Indian security forces in Occupied Kashmir on Saturday.

The Indian troops in their fresh acts of state terrorism laid siege to a house in the southern Pulwama area in Indian-Held-Kashmir and shot three freedom-fighters during a cordon and search operation in Kharpora Sirnoo area of the district.

How long are we going to shoulder the coffins of our youngsters? So many civilians killed today post encounter in Pulwama. No country can win a war by killing its own people. I strongly condemn these killings , and once again appeal for efforts , to stop this blood bath .

Earlier, two Indian soldiers were injured in an attack in the area. One of the injured later succumbed to his injuries.

While the gunfight was in progress, hundreds of villagers poured out on to the streets in freezing cold and marched towards the house, shouting slogans in support of the freedom fighters and throwing stones at the troops, witnesses said.

Indian troops fire bullets, pellets and teargas shells to disperse the protesters, killing seven more youth and injuring dozens others. One of them was an 8th-grade student.

Intense clashes between the demonstrators and Indian forces’ personnel were going on in the area when last reports came in, Kashmir Media Service reported.

Hospital officials said a seventh man died later of bullet injuries. Saturday's bloodshed capped the deadliest year in the region since 2009, with nearly 550 killed so far including some 150 civilians, according to a monitoring group.

It is a massacre in Pulwama.

Security officials say some 230 freedom fighters have been killed this year, most of them locals from the Kashmir valley.

Popular support for the cause has increased since the killing of a charismatic separatist leader in 2016.

Meanwhile, the occupation authorities have suspended rails service in the occupied territory.

The Chairman of Hurriyat forum, Mirwaiz Umar Farooq has asked India to stop genocide in the territory as its policy to kill the Kashmiri people will not yield anything except further rebellion and hatred against its illegal occupation of Jammu and Kashmir.

The Mirwaiz in a tweet wrote that terror and trauma on Kashmiris continues unabated as killing pursued as a state policy by India. He asked the government of India to stop this inhumanity as it will not achieve anything except further rebellion and hatred.

India and Pakistan each claim the divided territory of Kashmir in its entirety. Most Kashmiris support the rebel cause that the territory be united either under Pakistani rule or as an independent country while also participating in civilian street protests against Indian control.

India, which has deployed over 500,000 troops in the tiny Muslim-majority region, accuses Pakistan of arming and training the rebels, a charge Pakistan denies.

Nearly 100,000 people have been killed in the uprising and the ensuing Indian military crackdown.