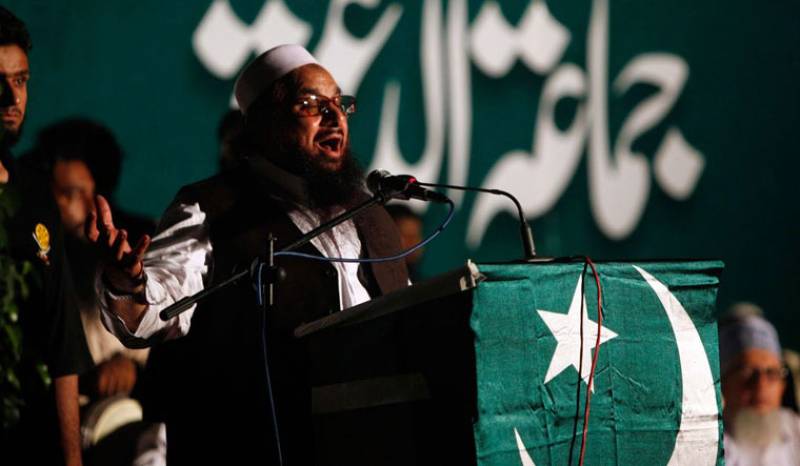 The bail was granted until August 3 in a case pertaining to the outfit's alleged illegal use of land for its seminary against surety bonds of Rs50,000 each.

Meanwhile, a two-member bench of the LHC comprising Justice Shehram Sarwar Chaudhry and Justice Mohammad Waheed Khan issued notices to the federal government, the Punjab government and the Counter-Terrorism Department (CTD) regarding a petition filed by Jamatud Dawa chief Hafiz Muhammad Saeed and his seven aides, challenging a case carrying charge of terror financing lodged by the CTD.

The LHC bench asked the parties to submit their replies within two weeks despite objection by a lawyer for the federal government who argued that the petition was non-maintainable. The bench, however, dismissed the objection and adjourned proceedings until July 30.

According to the joint petition, the JuD leaders submitted that the facts, narrated in the impugned FIR lodged on July 1, illegally described them as members of the Lashkar-e-Tayyaba (LeT) and levelled unlawful allegation of terror financing, Dawn News reported.

The counsel had referred to a 2009 judgment by a full bench of the LHC against the detention of Saeed at that time and stated that the petitioners were not members of the LeT.

He had stated that the LHC through another judgment in 2003 had held that Saeed had left the leadership of LeT on Dec 24, 2001 while the organisation was banned on Jan 14, 2002.

The lawyer had pleaded that the claim of the government that the petitioners were the members of the LeT stood disapproved in the light of the two judgments. Therefore, he had asked the court to quash the impugned FIR lodged by the CTD for being unlawful and of no legal effect.

The federation through the secretary ministry of interior, Punjab government through the home department and the SHO CTD regional headquarters Lahore were made party in the petition submitted in the high court.

On July 3, top 13 leaders of the banned JuD, including Saeed and Naib Emir Abdul Rehman Makki, were booked in nearly two dozen cases for terror financing and money laundering under the Anti-Terrorism Act, 1997.

In March this year, Pakistan had included Hafiz Saeed-led Jamaat ud Dawah (JuD) and its charity wing, Falah-e-Insaniat Foundation (FIF) in the list of 70 proscribed organisations.