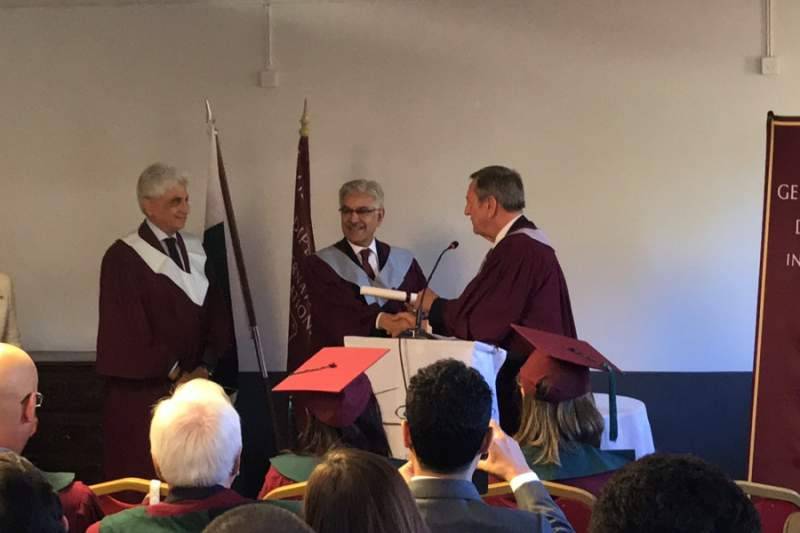 GENEVA - Foreign Minister Khawaja Muhammad Asif has been awarded an honorary doctorate degree by Geneva School of Diplomacy and International Relations (GSD) in Switzerland for his contribution to the betterment of Pakistan.

According to a statement issued by the GSD on Tuesday, Asif has been conferred with Doctor of International Relations (DIR) degree, “honoris causa, for his dedication and commitment, as a veteran politician and lawmaker, to the true betterment of Pakistan both at home and abroad”.

It adds the decision has been taken keeping in view his services as Minister for Water and Power to help reduce “energy poverty and chronic blackouts” and “his real contribution to the welfare of the ordinary people of Pakistan.

It also recounted his efforts for regional security, peace and stability as Minister of Defence.

The event was attended by GSD officials, students, envoys of Thailnad, Qatar, Malaysia, Bhutan, Turkey and other countries. Diplomats of many other countries were present on the occasion.

Speaking on the occasion, Asif said that the incumbent government of Pakistan with its efforts to limit terrorism has put the country on the track of development and created business-friendly environment. It has enhanced “regional connectivity through trans-boundary energy and infrastructure projects," the FO statement read.

The foreign minister is in Geneva to present a report on the third cycle of Universal Periodic Review, at the United Nations Human Rights Council.