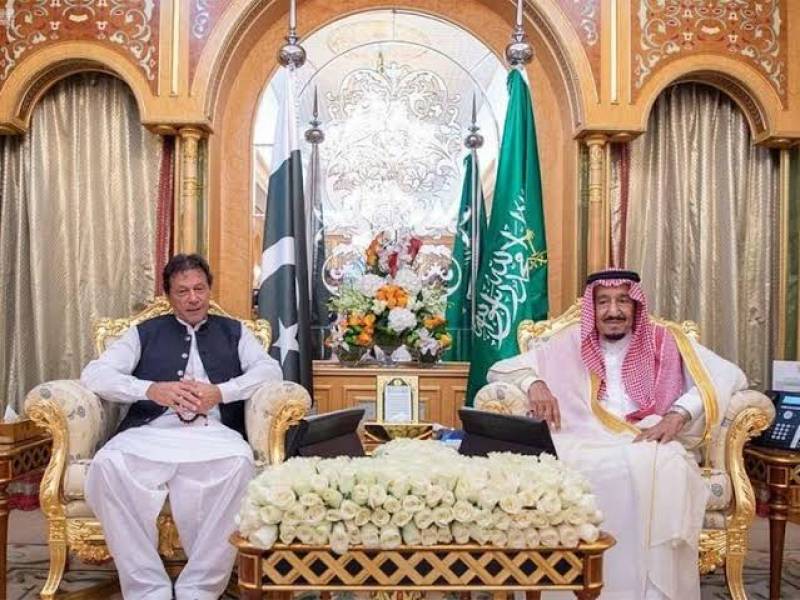 RIYADH - Prime Minister Imran Khan on Tuesday called on the top leadership of Saudi Arabia during a one-day visit to the Kingdom's capital aimed to mitigate tensions between Tehran and Riyadh.

The premier met Saudi King Salman bin Abdulaziz Al Saud and discussed matters of mutual interest, while no information has been shared by the government if there is any Saudi response about Gulf tension.

The premier and the Saudi crown prince vowed to strengthen the bilateral relations as well as cooperation.

PM Imran underlined that Pakistan wants peace and stability in the entire region, adding that all conflicts and disagreements can be resolved through political dialogue and diplomacy, Geo News reported.

The PM also apprised the crown prince about the deteriorated condition in occupied Kashmir.

"In the past, Pakistan had hosted Saudi Arabia and  Iran and is again willing to facilitate the brotherly countries to iron out their differences," the premier had said in Tehran, adding that it was Pakistan's own initiative to act as a facilitator.

Tensions in the region have been high for months, following US President Donald Trump's decision to impose crushing sanctions that target  Iran's crude oil sales and have crippled its economy.

Those sanctions came after Trump unilaterally withdrew the US from Tehran's nuclear deal with world powers last year. The US blames Iran for the attack, something Tehran denies. Saudi Arabia also blamed the attack on Iran.

However, in an interview the crown prince stated that a war with Iran will be catastrophic for the global economy. "We do not want a conflict between Saudi Arabia and Iran. Later in 1997, a meeting of the leadership of Iran and Saudi Arabia was hosted in Islamabad on the sidelines of an Organisation of Islamic Cooperation summit.Former president Pervez Musharraf also tried to make headway during 2003-2004.

However, his efforts did not make progress because he was seen as too close to the United States.

The premier is being accompanied by Foreign Minister Shah Mehmood Qureshi and Special Aide on Overseas Pakistanis, Zulfi Bukhari on his visit to the Kingdom.

PM Khan earlier visited the oil-rich kingdom in May and September this year, however, the upcoming visit is of crucial importance owing to the agenda regarding the de-escalation of tension between Iran and Saudi Arabia.

Frictions between Tehran and Riyadh swelled after the September 14 attack on Saudi oil facilities for which the United States and Saudi Arabia blamed Iran, despite denials by Tehran denied.

Moreover, on Friday, an Iranian-flagged oil tanker was damaged by two separate explosions off the Saudi port of Jeddah, sparking fears of a further escalation.