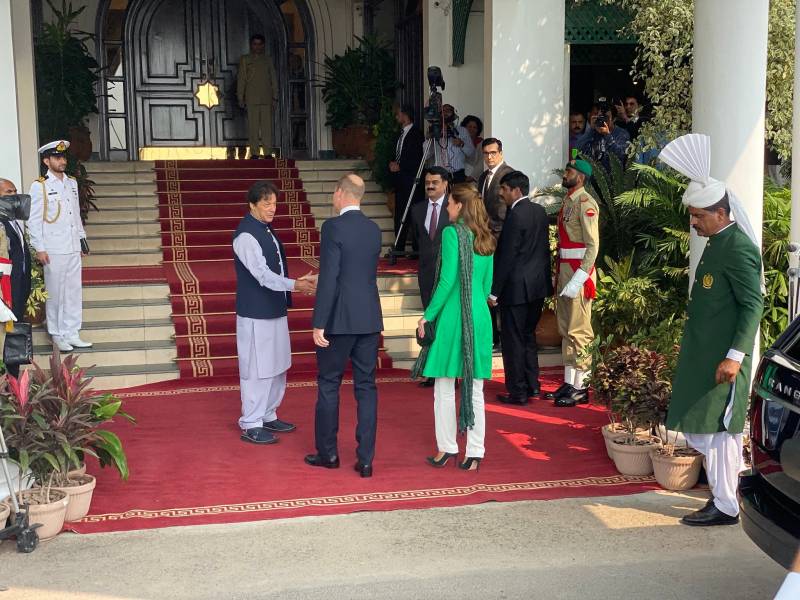 The royal couple was received by the premier at the Prime Minister House; Premier Khan shook hands with Prince William and Kate Middleton upon their arrival.

The meeting came after the royal couple met President Arif Alvi at the Aiwan-i-Sadr. Foreign Minister Sha Mehmood Qureshi and President Alvi's wife were also present during the interaction.

The Duke and Duchess of Cambridge called on the President here at the Aiwan-e-Sadr Islamabad today.
The President of Pakistan and the First Lady welcomed the Royal couple. #RoyalVisitPakistan #RoyaltourPakistan pic.twitter.com/Y8ykcOdkWn

The couple kicked off their engagements on the second day of their first tour to Pakistan with a visit to the Government Girls College and interacted with the staff and students besides visited classrooms.

A visit to the Pakistan National Monument is also part of the royal couple's agenda.

This is royal couple's first visit to Pakistan during which they aim to "meet as many Pakistanis as possible and build a lasting friendship with the people of the country".

The visiting dignitaries arrived in Islamabad on Monday and were accorded a rousing welcome as Foreign Minister Shah Mahmood Qureshi welcomed them along with other officials at the Nur Khan Airbase; British High Commissioner in Pakistan Thomas Drew was also present on the occasion.