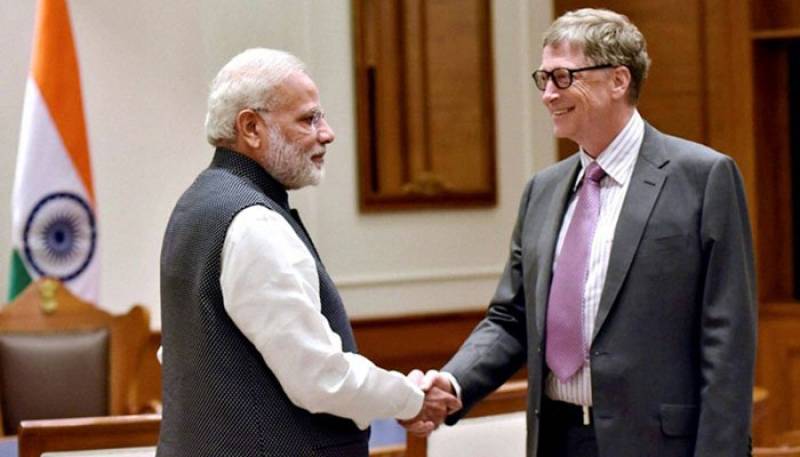 NEW YORK – The Bill & Melinda Gates Foundation is facing a barrage of criticism from prominent lawyers, human rights activists and philanthropists after it announced that it would honour Narendra Modi, India's controversial Hindu nationalist prime minister, with an award later this month in recognition of his work to improve sanitation in the country.

Over the last few days, an increasing number of rights advocates and organizations have called for rescinding the award, citing Modi's dismal human rights record in India and Kashmir.

"As Modi's India occupies Kashmir, the Gates Foundation has decided to give an award to the far-right Hindu nationalist," peace activist group CodePink said on Twitter.

Shame on the @gatesfoundation for normalizing the Indian occupation of #Kashmir and rewarding Islamophobic Indian PM Modi! https://t.co/zh8N9iU20d

"Shame on them!" Modi is being given the award for his 'Clean India Mission', at the foundation's annual Goalkeepers event in New York City on September 24-25.

Prominent New Delhi-based activist Kavita Krishnan told CNN she agreed with calls for the award to be revoked. She said the success of Modi's Swachh Bharat or Clean India mission was "exaggerated." The (Modi) government is implicated in organized violence against many minorities, this includes all people of Kashmir who have been held in captivity for more than a month now -- and there's torture happening there," she told CNN. Modi had a "terrible" record on human rights, she added.

Kenneth Roth, executive director of the New York-based Human Rights Watch, tweeted: "Why is the Gates Foundation choosing this moment to honor Indian PM Modi as Muslims in India face a clampdown in Kashmir, loss of citizenship in Assam, and unremedied violence across the country?"

Three Nobel Laureates object to the @GatesFoundation honoring Indian PM Modi at this time, noting Kashmir and Assam as "cause for great concern." https://t.co/cdjlHjBFZl pic.twitter.com/2F2H5QYmoI

Meanwhile, a petition signed by South Asian-Americans and their allies in philanthropy, which so far has garnered more than 95,000 signatures, said the award "could not have come at a more awkward time", pointing to the current crackdown in Indian Occupied Kashmir and a citizenship exercise that has excluded nearly two million people, mostly Muslims, in the northeastern state of Assam.

Modi's Hindu nationalist government has been accused by the critics of pursuing exclusionary policies against the minorities in India as part of its far-right agenda.

Last month, India stripped Kashmir of its special status and imposed a crippling security lockdown in the disputed region, which has entered its second month.

"In Kashmir, more than 800,000 Indian armed forces have kept eight million Kashmiris detained in their own homes without phones or internet services for the last month," the petition said.

"Since the Bharatiya Janata Party (BJP) came to power in 2014, the use of organized mobs and militias have undermined the rule of law so frequently that the Indian Supreme Court warned that these 'horrendous acts of moboracy cannot be permitted to inundate the law of the land'.

" In a statement, the Gates Foundation said it stood by its decision to honour Modi "for the progress India is making in improving sanitation".

But the Indian leader's treatment of ethnic minorities in his country's northeastern state of Assam including plans to put "non-citizens" in camps and his government's August assault on Kashmir raise questions on the wisdom of honoring the right-wing leader.

Modi is "committing genocide of Muslims in India and Kashmir but is receiving an award in a few weeks here in the United States from the super liberal Gates Foundation," tweeted author Saira Rao.

"This isn't complicated," human rights lawyer and activist Arjun Sethi said on Twitter. "If you build a toilet in one room, and torture in another, you're undeserving of recognition."

Modi arrives in the US one week from today.

Some will cheer because they
support fascism, while others want access to the Indian market.

But people of conscience will protest. They will stand with Kashmir & Assam, support those who face daily hate in India & remember Gujarat.

The effects of Modi's tenure as prime minister were further expounded upon in The Washington Post by Polis Project executive director Suchitra Vijayan and Georgetown law professor Arjun Singh Sethi: When Modi was elected, many chose to overlook his murky past but India's vulnerable could not. He has used both state power and the bully pulpit to further his ethnonationalist agenda, it was pointed out. Under his leadership the country has witnessed a spike in hate crimes and mob violence, particularly against Muslims and Dalits. Rarely are the perpetrators held accountable. Last summer, a minister in Modi's cabinet even celebrated eight men who had been convicted of lynching a Muslim. Modi himself rarely publicly mentions the hate and violence surging across India.

The authoritarianism and brutality of the Modi government in Kashmir, Muslim Democratic Club of New York co-founder Faiza N. Ali said on Twitter, should disqualify the Indian prime minister from any such award.

"Modi is a fascist and Islamophobe, full stop," Ms. Ali tweeted. "The Gates Foundation should not proceed with this award after he's placed a communication blockade in Jammu and Kashmir, detained thousands including kids, and amid other serious human rights violations."

Yale University researcher Gregg Gonsalves decried Modi as "not worthy of any award." "He is a despot-in-the-making, a human rights abuser," said Gonsalves.

"Everyone in public health should speak up."

Modi has been accused of inciting and condoning the 2002 Gujarat riots, in which more than two thousand Muslims were killed during his time as chief minister of the western state. However, Indian courts have cleared him of complicity in modern India's worst anti-Muslim violence.

As a result of the Gujarat violence, the US government - under its International Religious Freedom Act - denied Modi a visa in 2005. The ban remained in place until 2014, the year he was elected as India's prime minister.