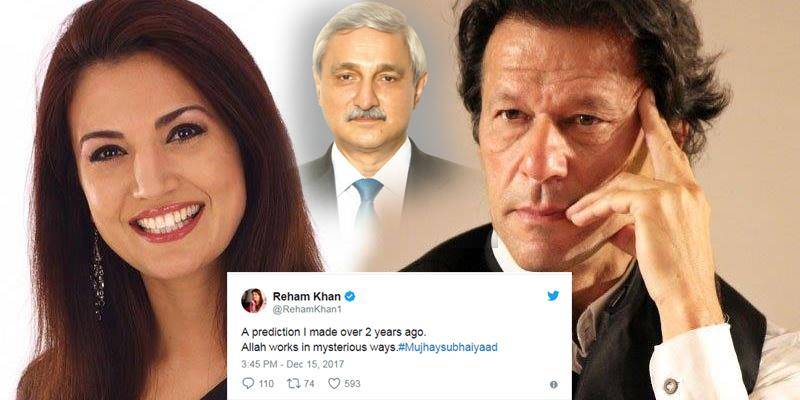 Tareen, who stepped down on Saturday as the party’s secretary general following his disqualification by the Supreme Court, is the same man who Reham alleged was responsible for her divorce with the PTI chairman.

In a very short tweet, which holds no direct reference to the context, the former ‘First Lady’ of PTI said: “A prediction I made 2 years ago. Allah works in mysterious ways. #Mujhaysubhaiyaad”.

Her statement has invited a storm on the social media, with many twitteratis criticising her as an "attention seeker" and comparing her with Khan's first wife, Jemima Khan.

today jemaima is winner and you are looser .

Kindly mention your prediction as well.

While social media users are busy deciphering what Ms Khan wanted to communicate, her 'mysterious' tweet takes us back to the time when she accused Tareen as “the actual script writer of whole divorce row” and that he was the one who created misunderstandings between Imran Khan and the former BBC presenter.

Imran Khan and Reham Khan had divorced with mutual consent after 10 months of marriage in October 2015.

Following the separation, in a series of tweets, Imran Khan wrote that the divorce is painful for him, Reham and their respective families and requested everyone to respect their privacy.

This is a painful time for me & Reham & our families. I would request everyone to respect our privacy.

I have the greatest respect for Reham's moral character & her passion to work for & help the underprivileged.

Soon after their divorce, first reported by Pakistan’s renowned journalist Arif Nizami, made headlines, Reham Khan conceded that she and the PTI chief used to have arguments but it were Imran’s “friends who were the actual reason behind all these fights”.

“Imran Khan was advised to divorce me immediately after I left for London,” she told the media in the same year of her divorce.

In her first interview after the high-profile split, Reham said she was a victim of a witch hunt in Pakistan. “A conspiracy was hatched against me,” Reham said in an interview with British newspaper Sunday Times.

She had also claimed that Jahangir Tareen used to spend most of his time at Bani Gala residence before her marriage with Imran Khan, but she restricted the PTI leader’s access to her husband after marriage.

Jahagir Tareen then dismissed the allegation of Reham Khan, saying he felt sorry for Imran Khan and Reham for their divorce but “how could I be responsible for the cracks in their relationship?”

The PTI chairman and television journalist Reham Khan had tied the knot in a simple nikkah ceremony which took place in January, 2015, at Khan's Bani Gala residence.

The nikkah, which was a low-key affair, was conducted by Mufti Saeed and was followed by a photo session. The wedding had captivated the entire country, with television channels going all out to cover the event and furnishing their audience with details of wedding sherwani and chappals.